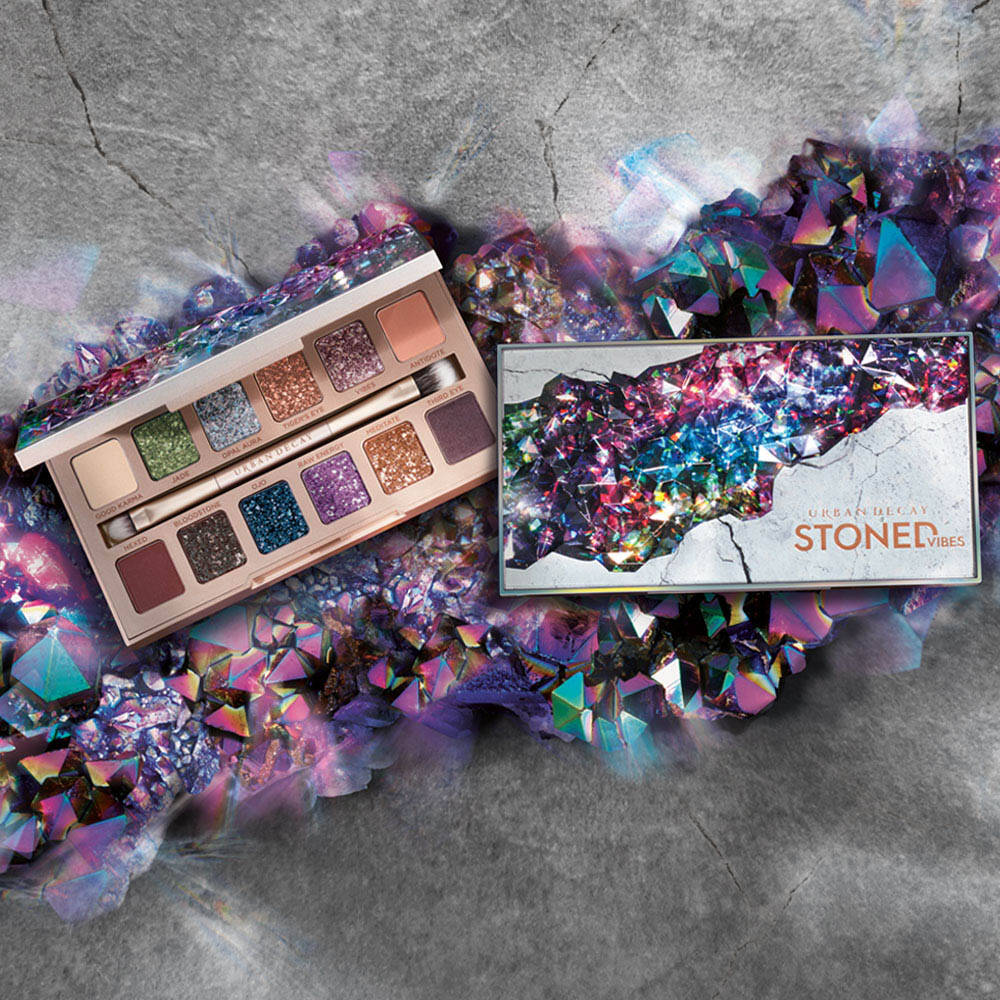 Whenever a new beauty product is found online, it doesn’t take long for the images to spread across social media, and the Urban Decay Stoned Vibes Eyeshadow Palette was revealed yesterday and is available right now. It has launched as part of a whole Stoned Vibes collection, in addition to the Stoned Vibes Lip Glosses and Stoned Vibes Highlighter too.

Each of its ultra-blendable, gemstone-inspired marbleized eyeshadows features a hybrid powder-cream vegan formula that gives you maximum shimmer and glitter, minus the fallout. Plus four mattes to create a full look.” 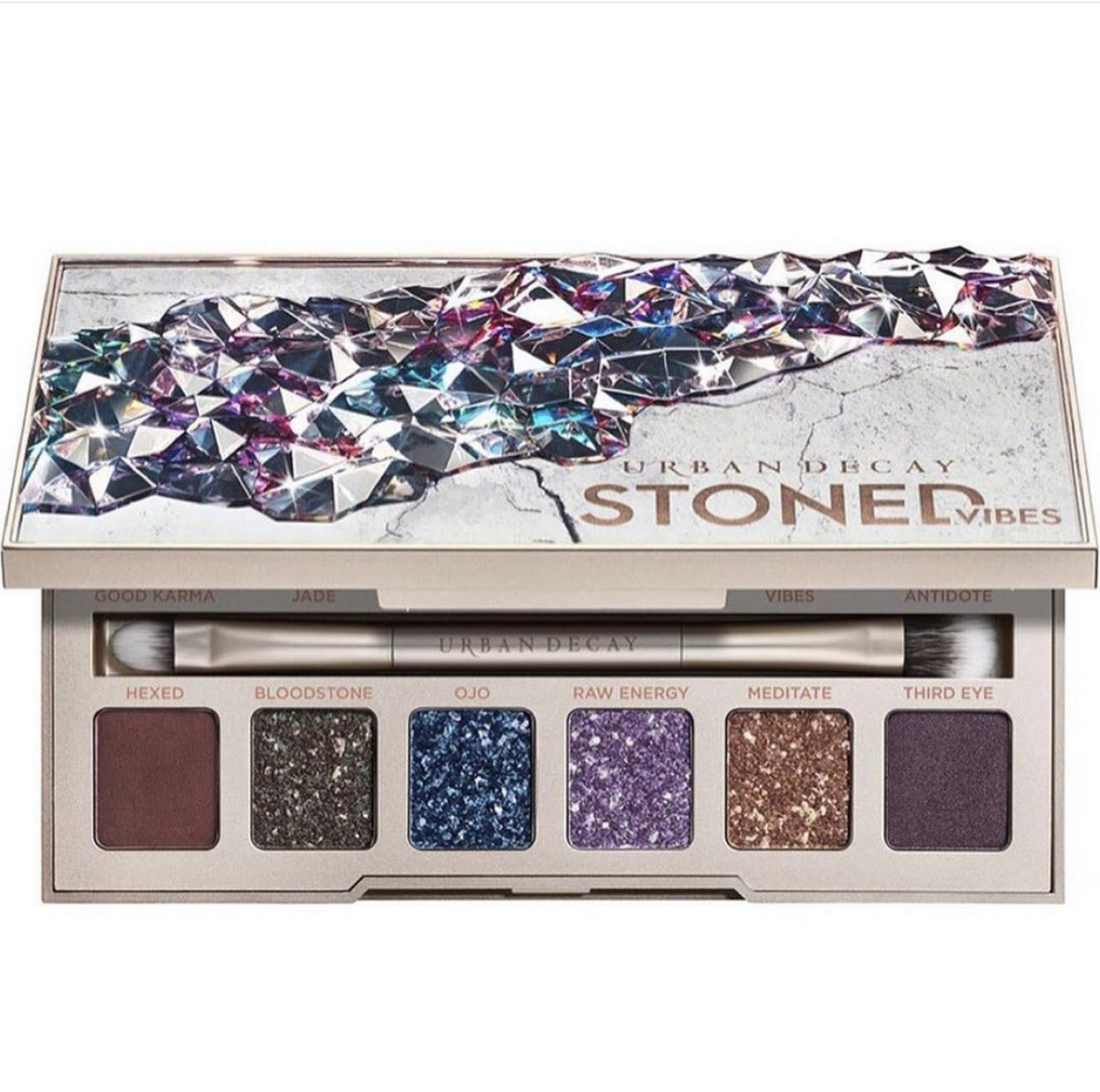 The Urban Decay Stoned Vibes Eyeshadow Palette has a case style packaging, just like their Shattered Face Case – which true fans of the brand will remember. 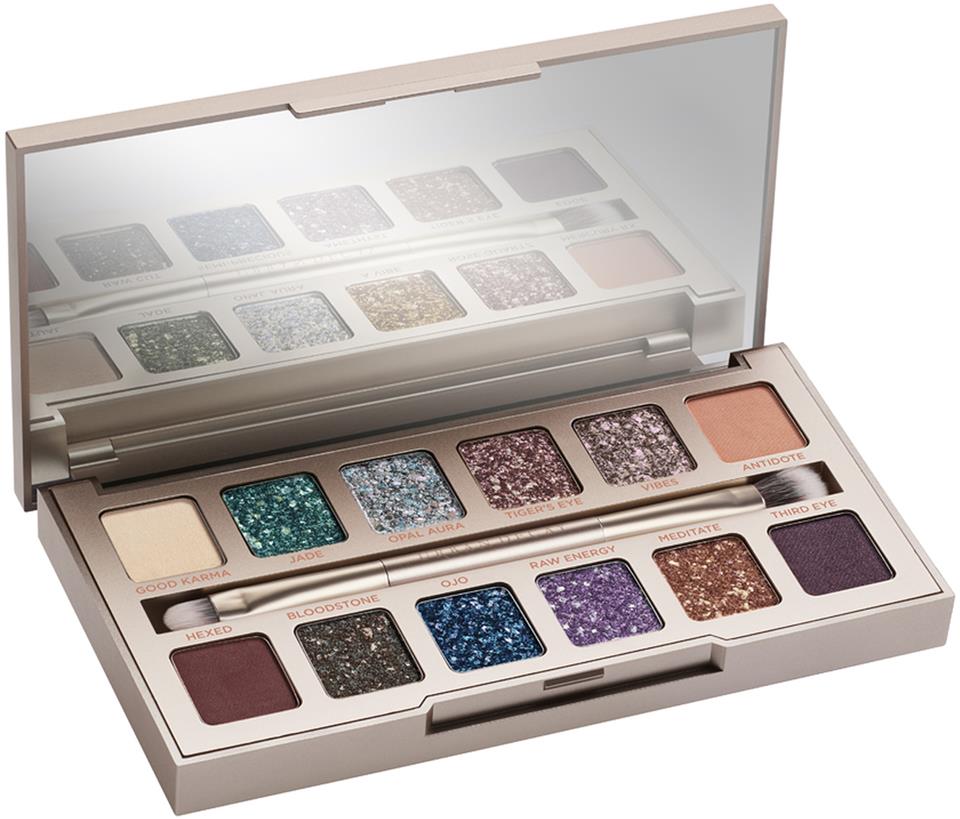 The lid of this palette has the most amazing raised crystalized effect which is absolutely stunning, and I love the 3D effect. 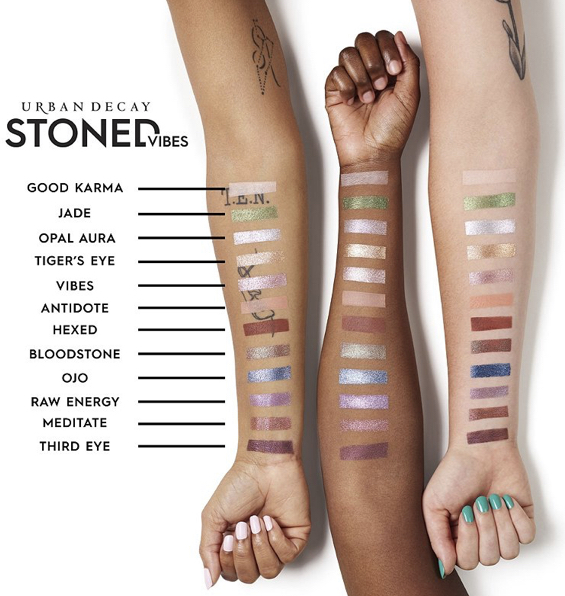 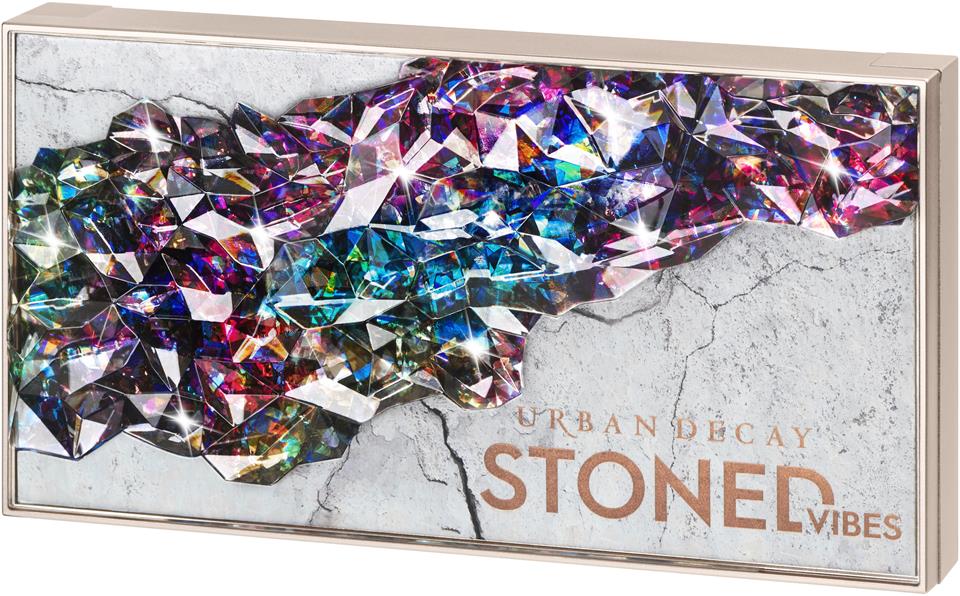 It does look to have quite a bit of excess packaging surrounding each shade, with a chunky lid so it won’t be a palette for those that prefer more minimalist packaging designs. 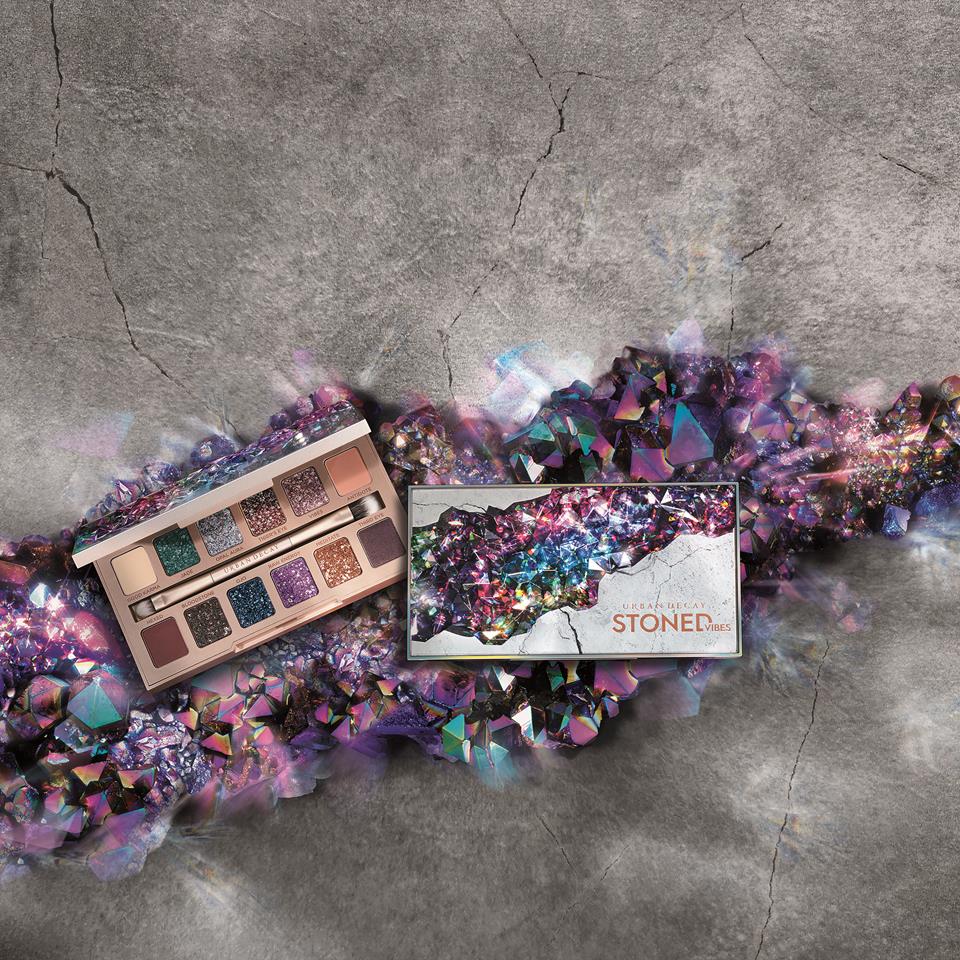 Inside the palette, there’s twelve eyeshadows as well as a mini dual-ended eyeshadow brush.

The brush has the same style as the brush included inside the Urban Decay Naked 2 Palette, with a flat side for packing shadow onto the lids, and a fluffy brush on the opposite end for blending shadow out. 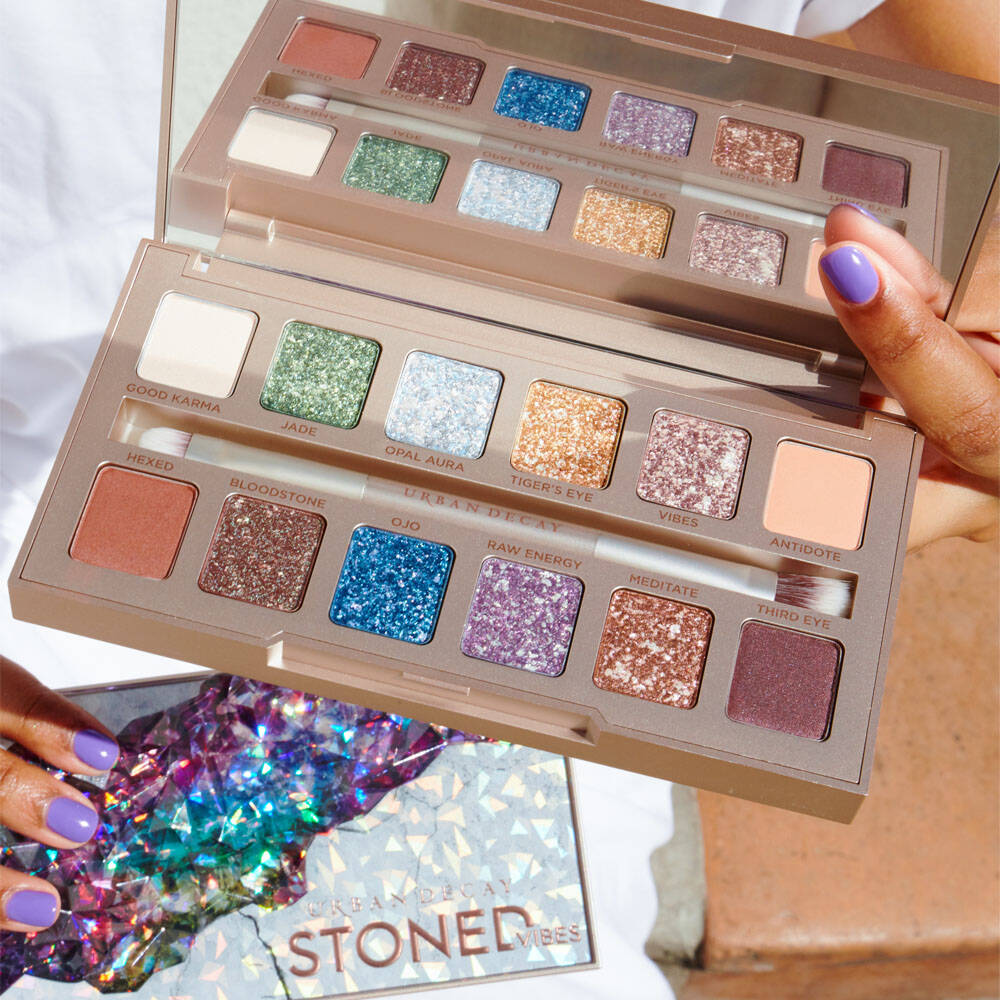 “A vegan formula* eyeshadow palette packed with 12 all-new mood-shifting shimmery shades infused with extracts of genuine tourmaline to elevate your look. Get a glow with an ultra-creamy, velvety texture without the fallout. Manifest it all with the Stoned Vibes Eyeshadow palette — eight creamy, prismatic shimmers and four grounded mattes.

Each of these stone-like speckled eyeshadows were designed to deliver shimmering colour payoff. Plus, get playful with your fingertips for a powerful dose of colour or use the included a double-ended brush—great for getting Stoned on the go!“ 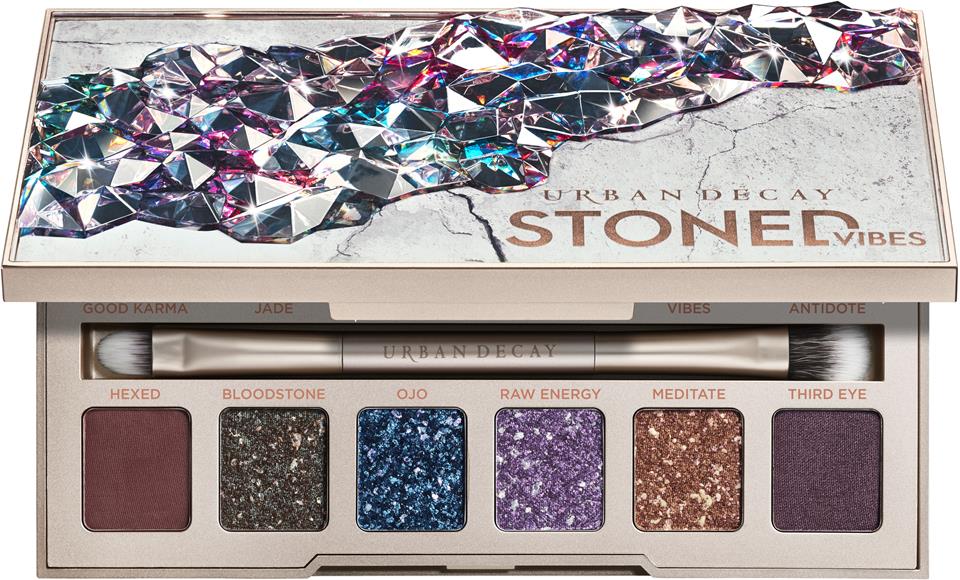 Inside the Urban Decay Stoned Vibes Eyeshadow Palette, there are four matte shades – each of which sit in the four corners of the palette. In addition to the four mattes, there’s eight marbleized jewel toned shades – similar to the marble shades in the Huda Beauty New Nude Palette. 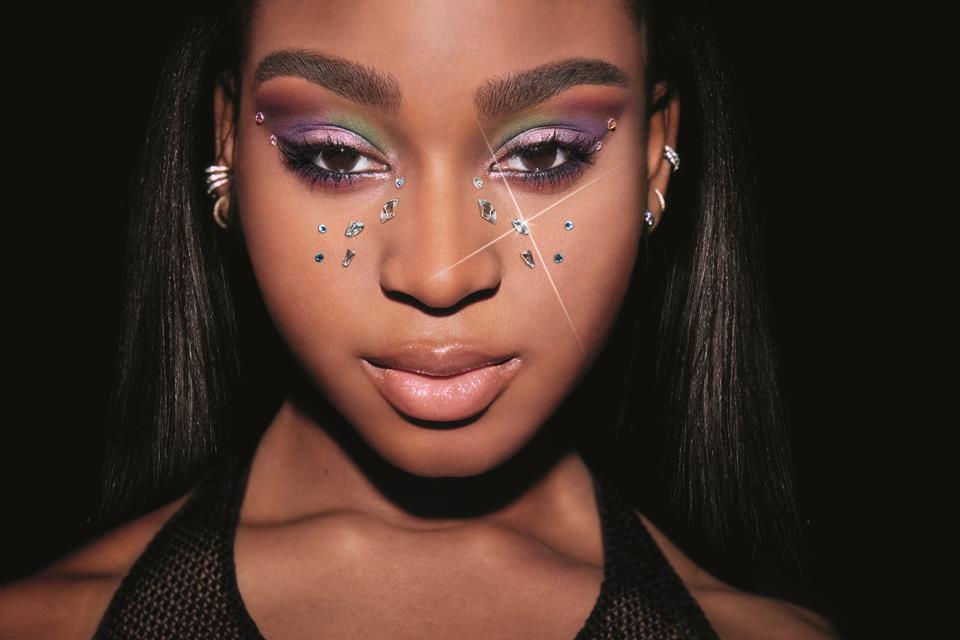 They have a beautiful multi-dimensional effect to resemble real gemstones, and complement the ‘stones’ theme of the palette beautifully.

The colour story inside the Urban Decay Stoned Vibes Eyeshadow Palette is giving me Urban Decay Smoked Palette vibes, which was one of my all time favourite Urban Decay palettes, but this palette has a more modern twist. 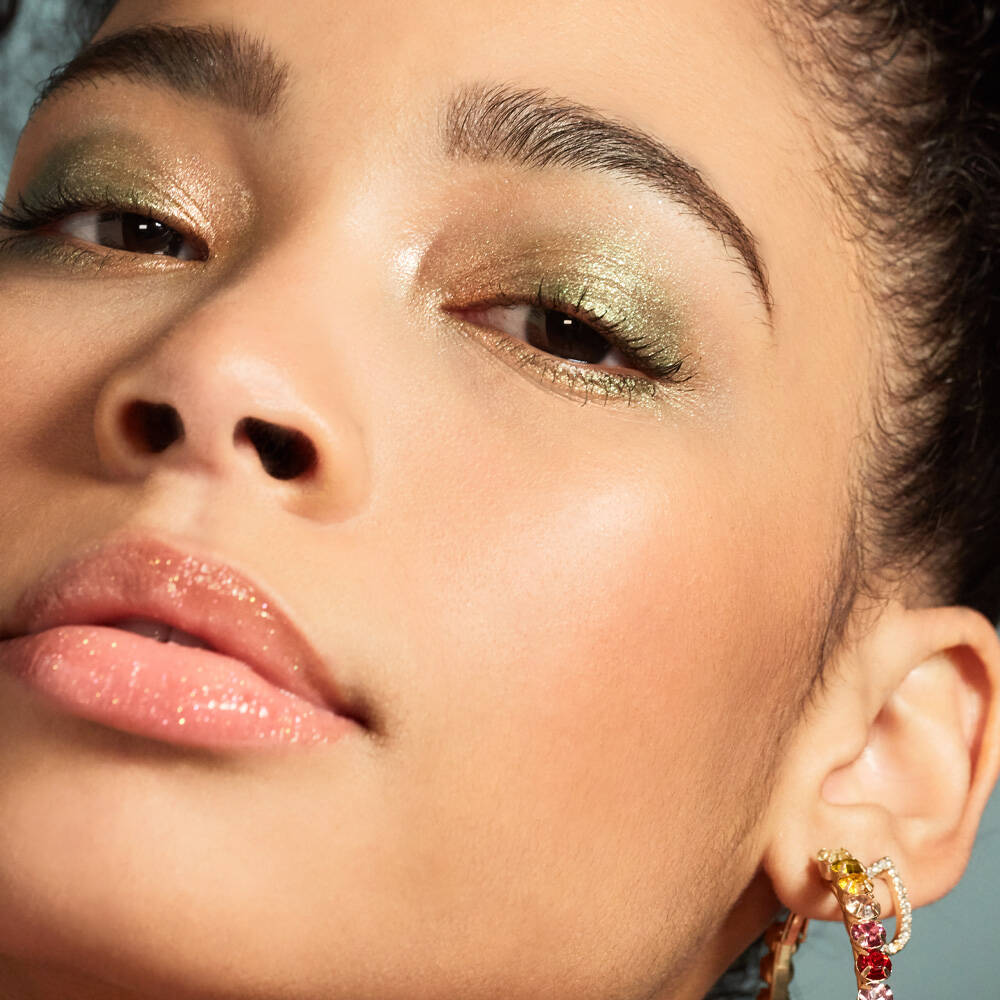 This palette is such a stunning palette, and it gives me retro Urban Decay vibes. It’s one of the most exciting palettes they’ve launched in a very long time, and I can’t wait to try it.