The Sleek MakeUP Nano Brow Disc is £7.99 and available in four different shades; Blonde, Ash Brown, Medium Brown and Dark Brown. The packaging is sleek with a black plastic pot, and elongated handle with a roller disc applicator which looks just like the roller eyeliners such as the Revlon Exacify Eyeliner.

The packaging only contains 1ml of product which really isn’t very much at all, so I can’t imagine it’ll last very long especially as you have to draw the ‘disc’ back and forth through the brows to create the hair-like strokes. In fairness, the Revlon Exactify Eyeliner also only contains 1ml so it must be a standard across the roller wheel products.

The liner was a bit of a gimmick as it wasn’t very flexible when drawing across the eyelid, but I think the Sleek MakeUP Nano Brow Disc might actually be genius as you can draw the outline, and fill the brows easily. I’ll hold out to see what the swatches are like, but I really want to try it!

All images belong to Sleek MakeUP. 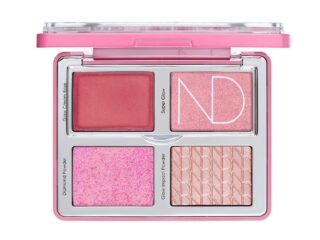 You can also find me here: Gemma Etc. / Miss Makeup Magpie
We use cookies on our website to give you the most relevant experience by remembering your preferences and repeat visits. By clicking “Accept”, you consent to the use of ALL the cookies.
Cookie settingsACCEPT
Manage consent

This website uses cookies to improve your experience while you navigate through the website. Out of these, the cookies that are categorized as necessary are stored on your browser as they are essential for the working of basic functionalities of the website. We also use third-party cookies that help us analyze and understand how you use this website. These cookies will be stored in your browser only with your consent. You also have the option to opt-out of these cookies. But opting out of some of these cookies may affect your browsing experience.
Necessary Always Enabled

Performance cookies are used to understand and analyze the key performance indexes of the website which helps in delivering a better user experience for the visitors.

Analytical cookies are used to understand how visitors interact with the website. These cookies help provide information on metrics the number of visitors, bounce rate, traffic source, etc.

Advertisement cookies are used to provide visitors with relevant ads and marketing campaigns. These cookies track visitors across websites and collect information to provide customized ads.

Other uncategorized cookies are those that are being analyzed and have not been classified into a category as yet.