Revolution has announced yet another collab, and this time it’s the Revolution x Coraline Makeup Collection, which is yet another Halloween collection for the brand. 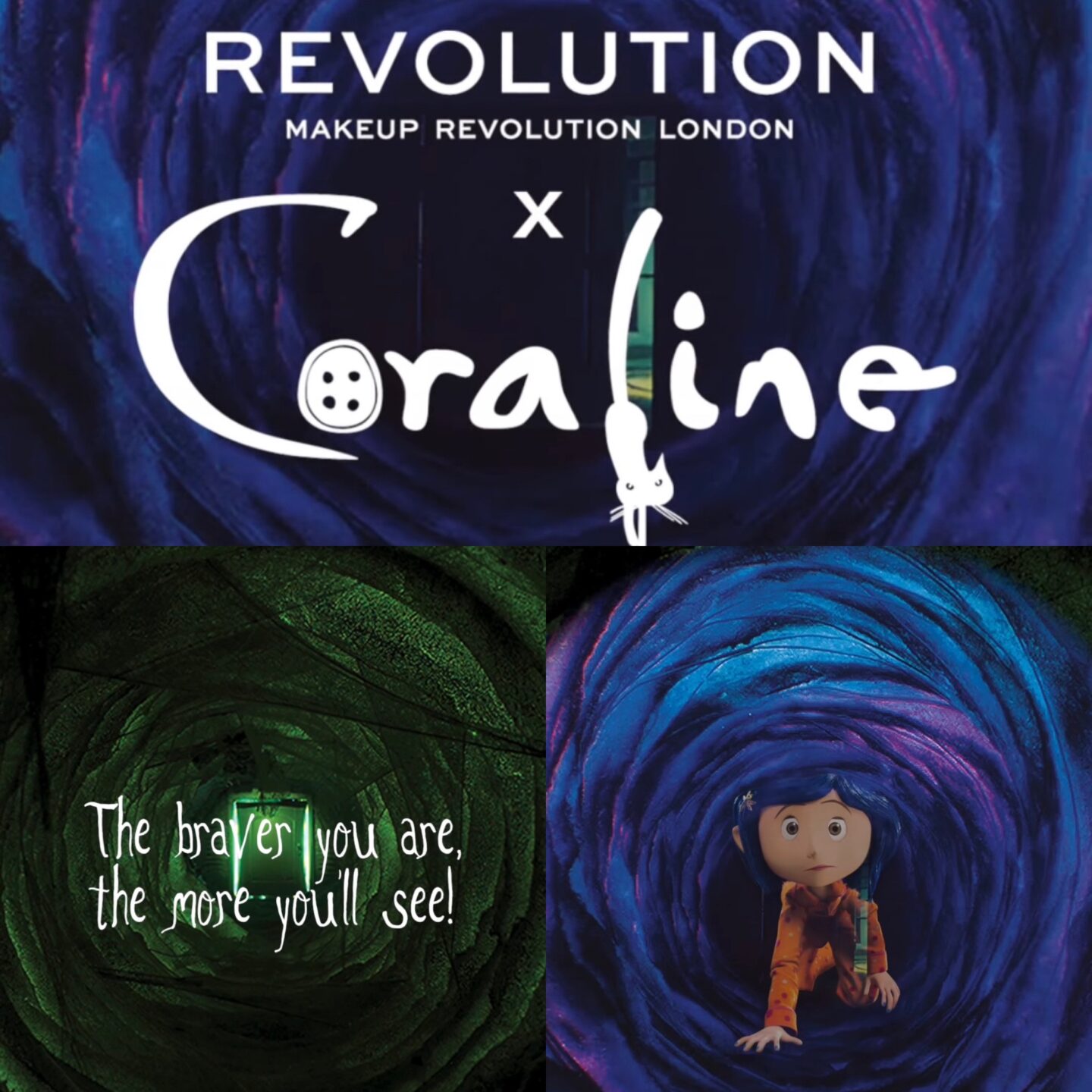 Last year, we saw Revolution launch three Halloween collections (The Matrix, Corpse Bride and The Simpsons), so it’s possible this could be the last of the Halloween collabs to launch, ahead of the Christmas collabs (like the upcoming Revolution Grinch collab). 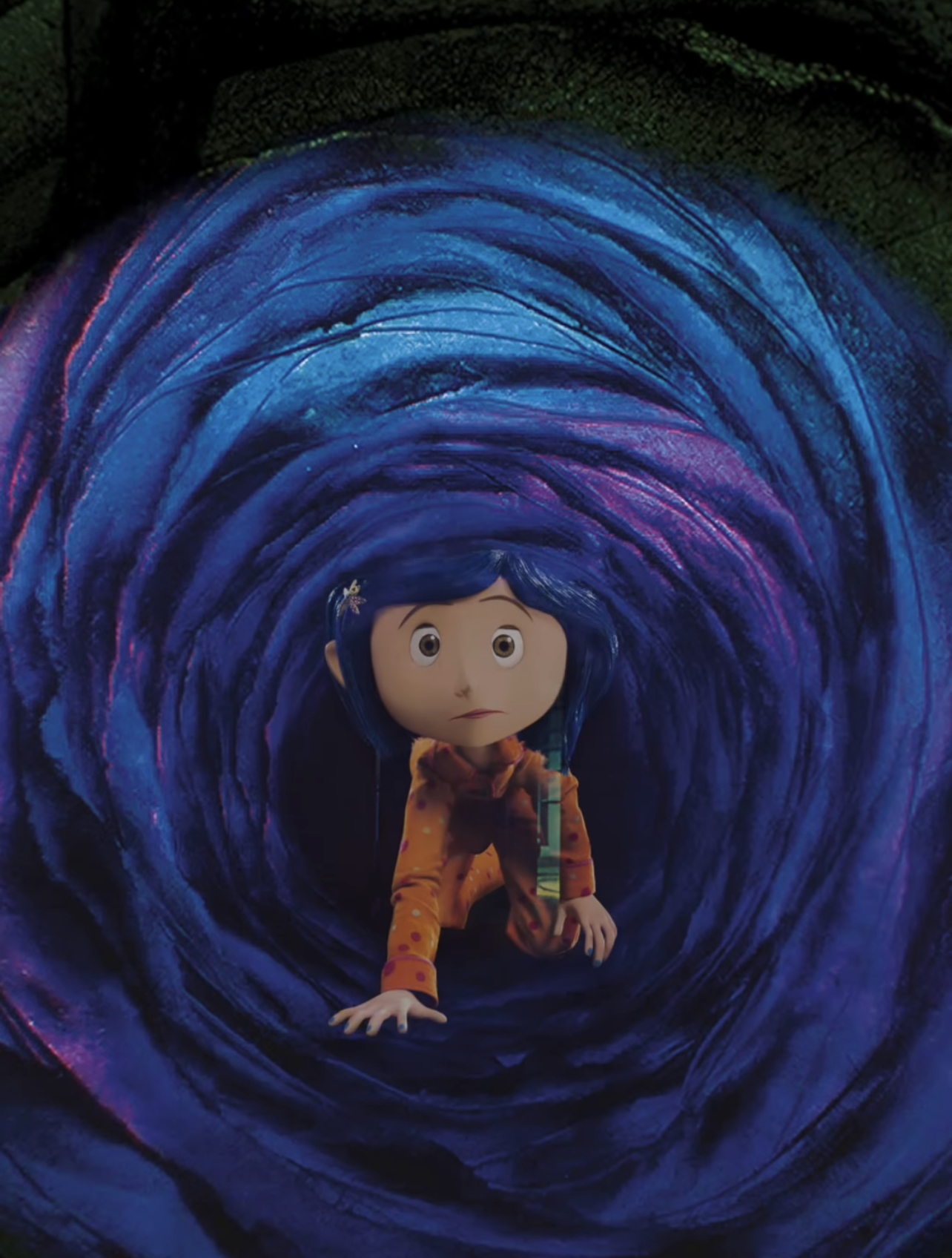 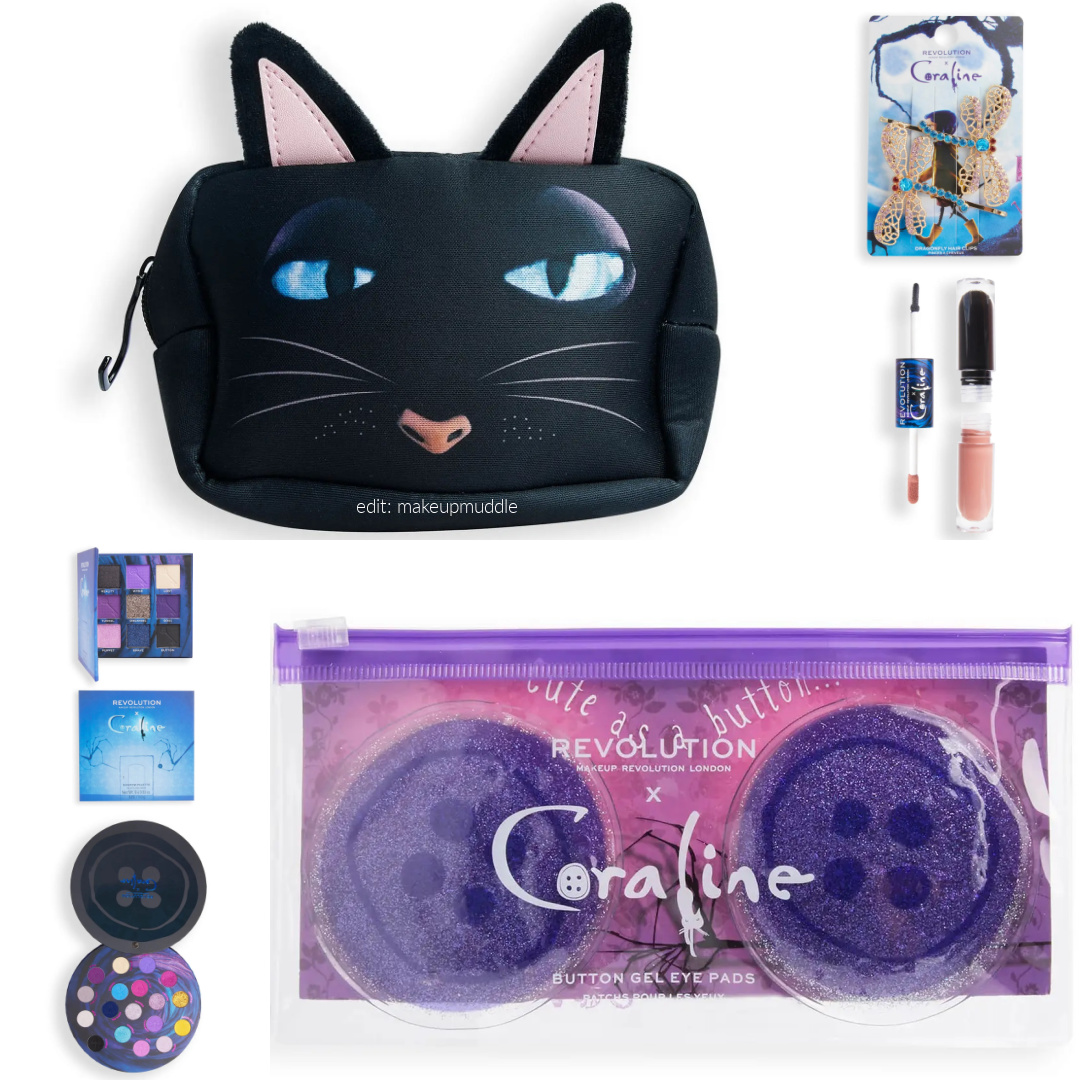 The Revolution x Coraline Makeup Collection is themed around the Coraline 2009 movie. Wikipedia describes the movie as being a dark fantasy children’s novella by British author Neil Gaiman, published in 2002 by Bloomsbury and HarperCollins. 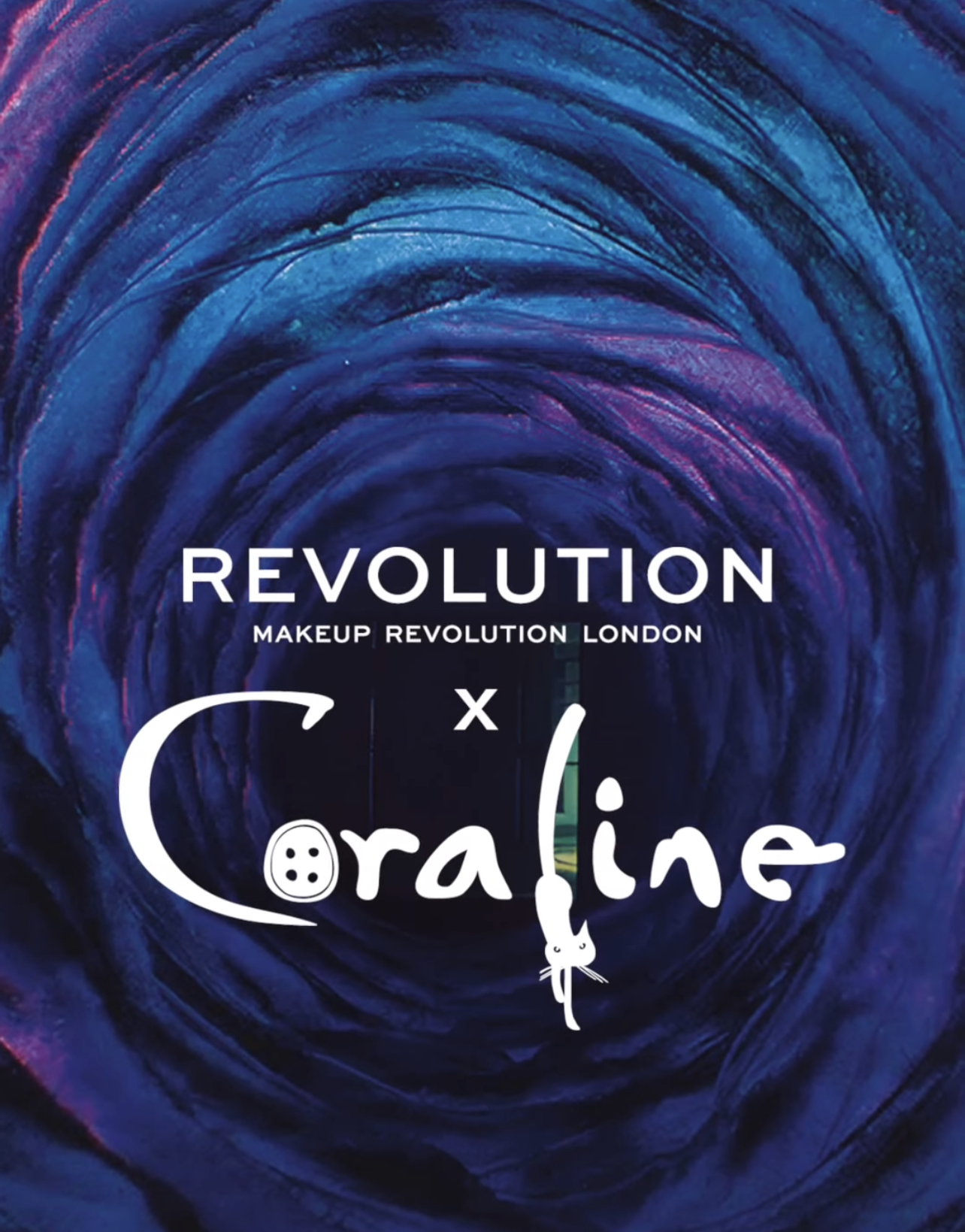 Coraline is a very different collaboration, and it’s not one we’ve seen before from other beauty brands. Beetlejuice wasn’t super popular (like say their Simpsons Halloween collab), but I think that’s because we’ve seen an amazing Melt Cosmetics Beetlejuice collab, so it’s possible a Coraline collab would be super popular as it is so unique. 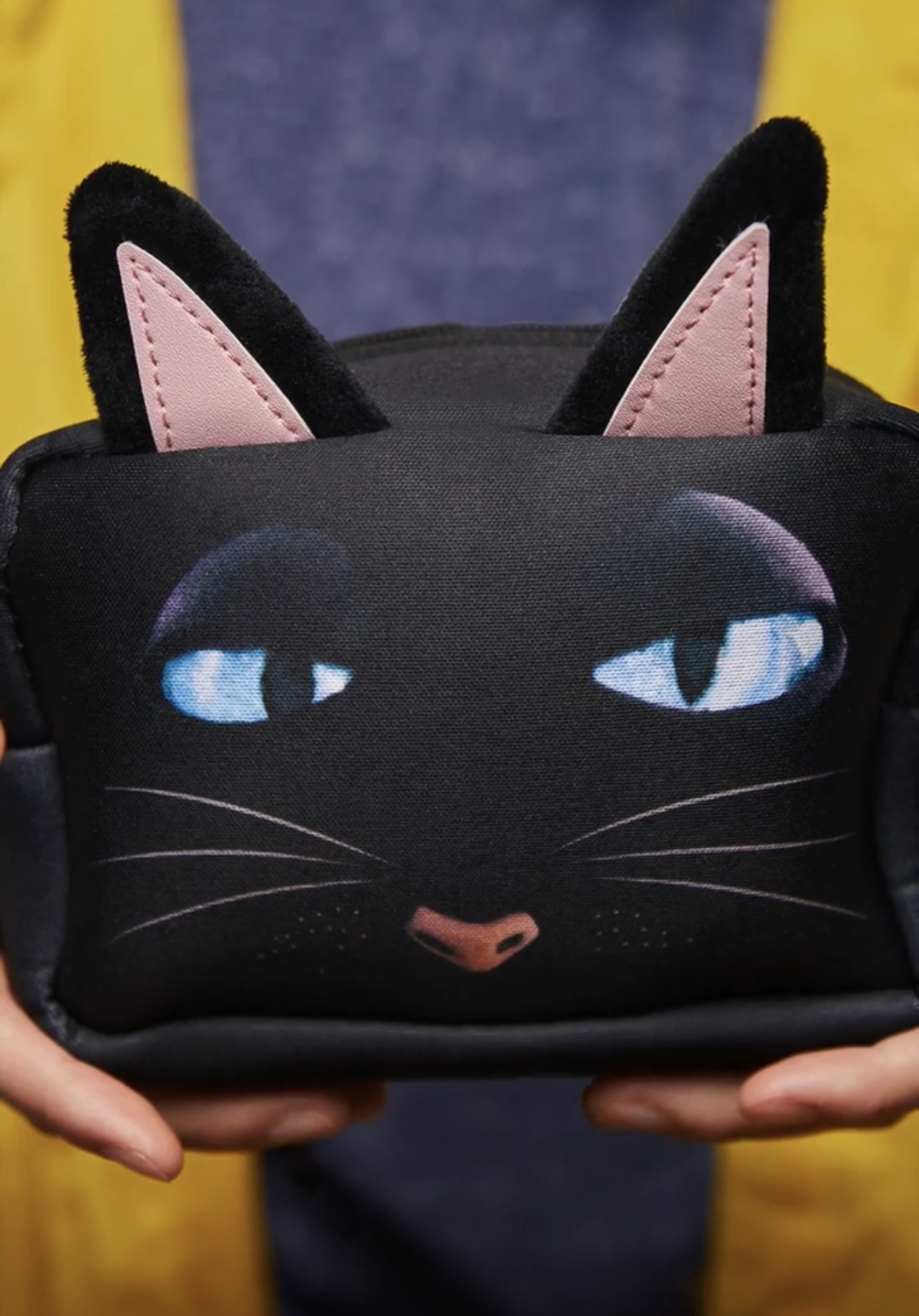 If you love cats, you’re going to need this makeup bag in your life. It looks like the makeup bag is a decent size, and the zip features a cat tail shaped charm, which looks super cute. 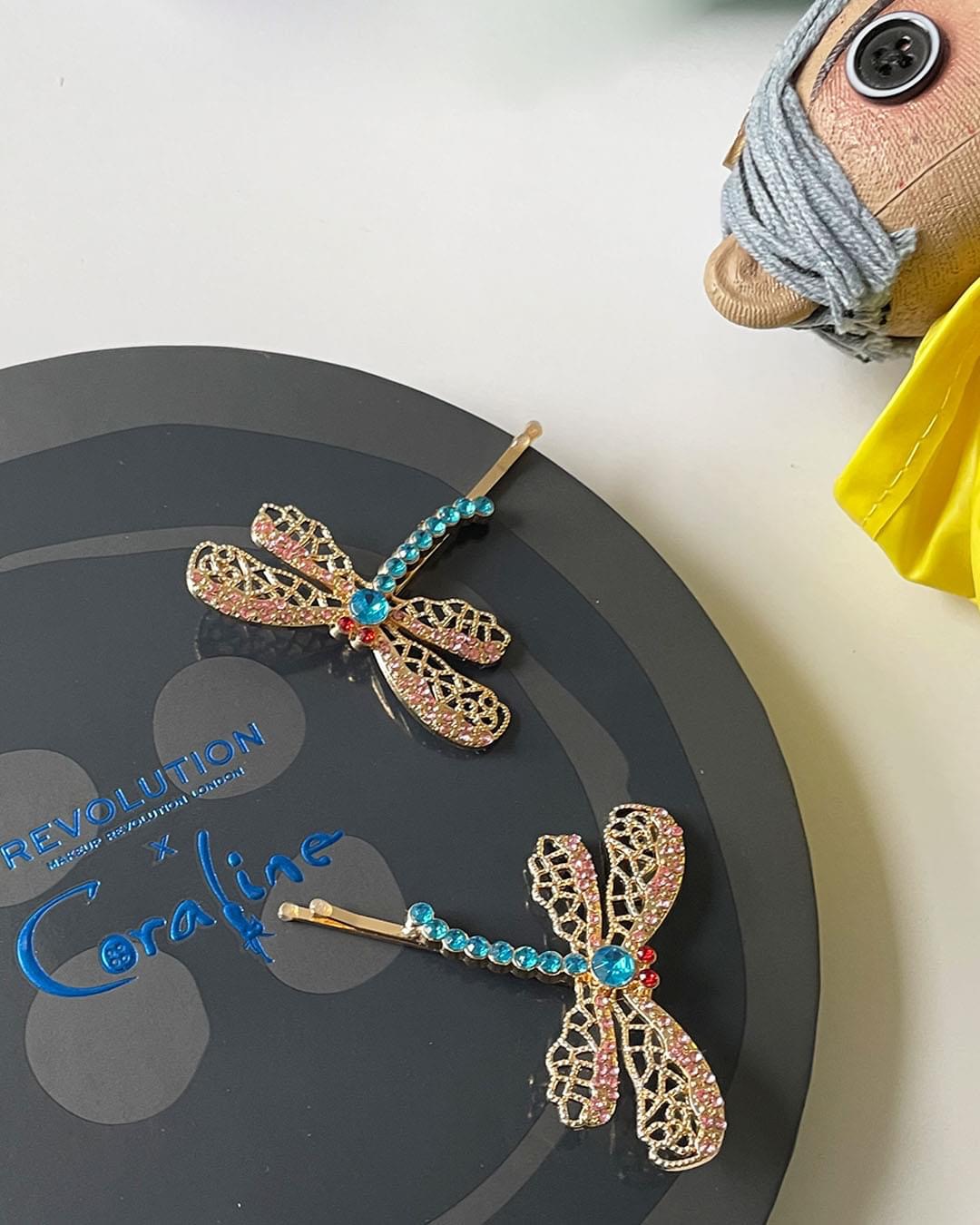 They do look very pretty, and unlike anything we’ve seen from Revolution before. The pattern on the clips for the wings of the dragonflies look so intricate, and the little gems look so sparkly. 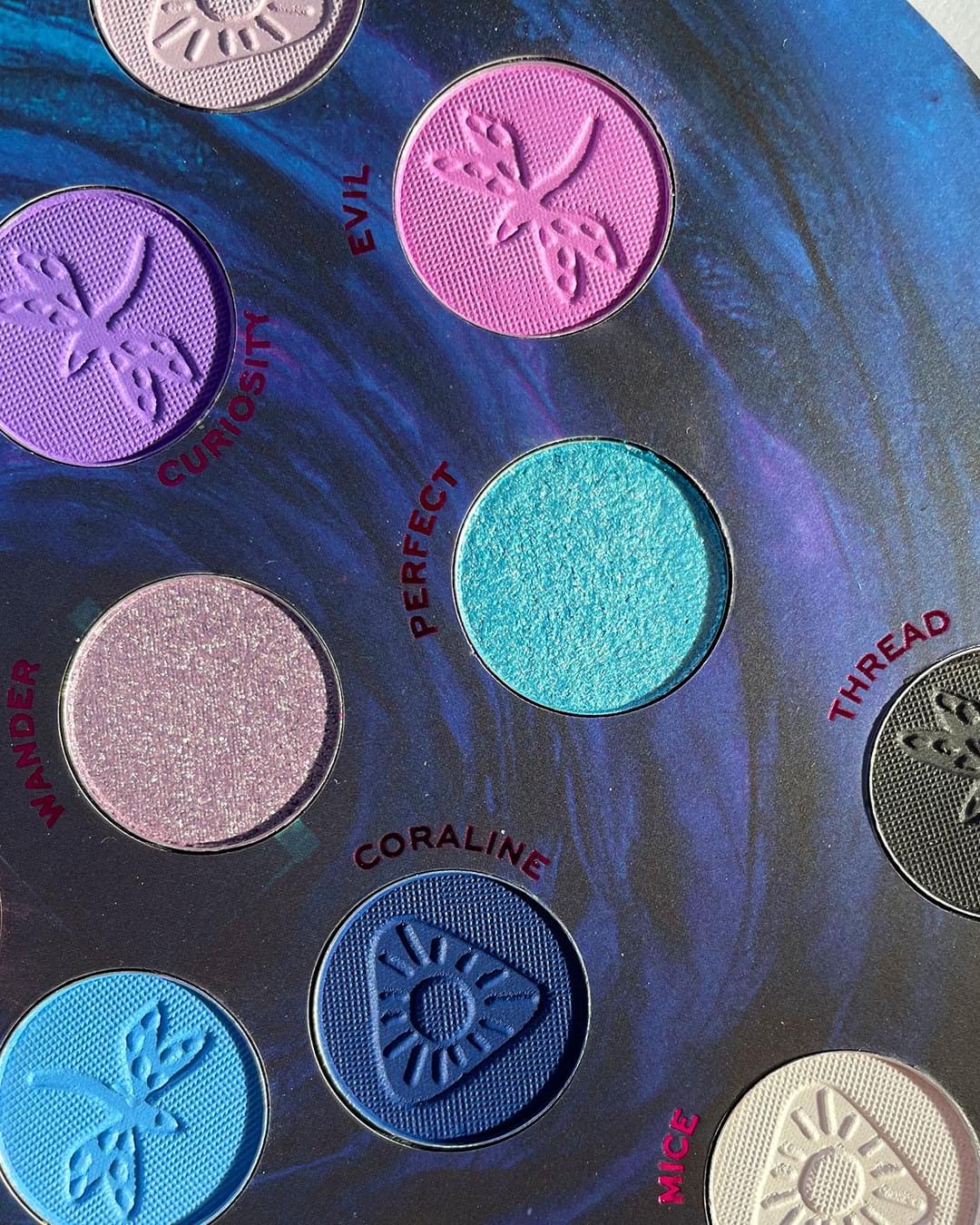 The next product in the Revolution x Coraline Makeup Collection is the Revolution Beauty Coraline X Makeup Revolution Button Eye Palette, which is a circular palette, with a slide-off lid, which reveals eighteen powder shadows, laid out in a spiral within the “button” format of the palette. The Button Eyeshadow Palette features a mix of matte and shimmer shadows, with small circular pans. The matte shades all have patterns within the pans, and the names are all themed around the Coraline movie. The Coraline collection includes another eyeshadow palette, but this one is considerably smaller, and features nine shades in comparison. This is a square shaped palette, and is called the Coraline X Makeup Revolution The Secret Door Palette, with nine x 1g shadows. Inside this palette, the shadows are laid out in nine square pans, and the matte shades all have key patterns in the pans, with five matte finish shadows, and four shimmer finish shadows. Next in the Revolution x Coraline Makeup Collection, is something extremely random, and it’s the Coraline X Makeup Revolution Cooling Button Eye Pads. They’re little circular plastic pouches, with a button pattern on them, and they can be kept in the fridge, and used for placing over the eyes to reduce puffiness. I get that they’ve been designed to look like buttons, to tie into the movie, but they just feel a bit random, with the dragonfly hair grips. It’s quite a small collection, I think it would’ve been better to include a mirror or makeup brush set instead. 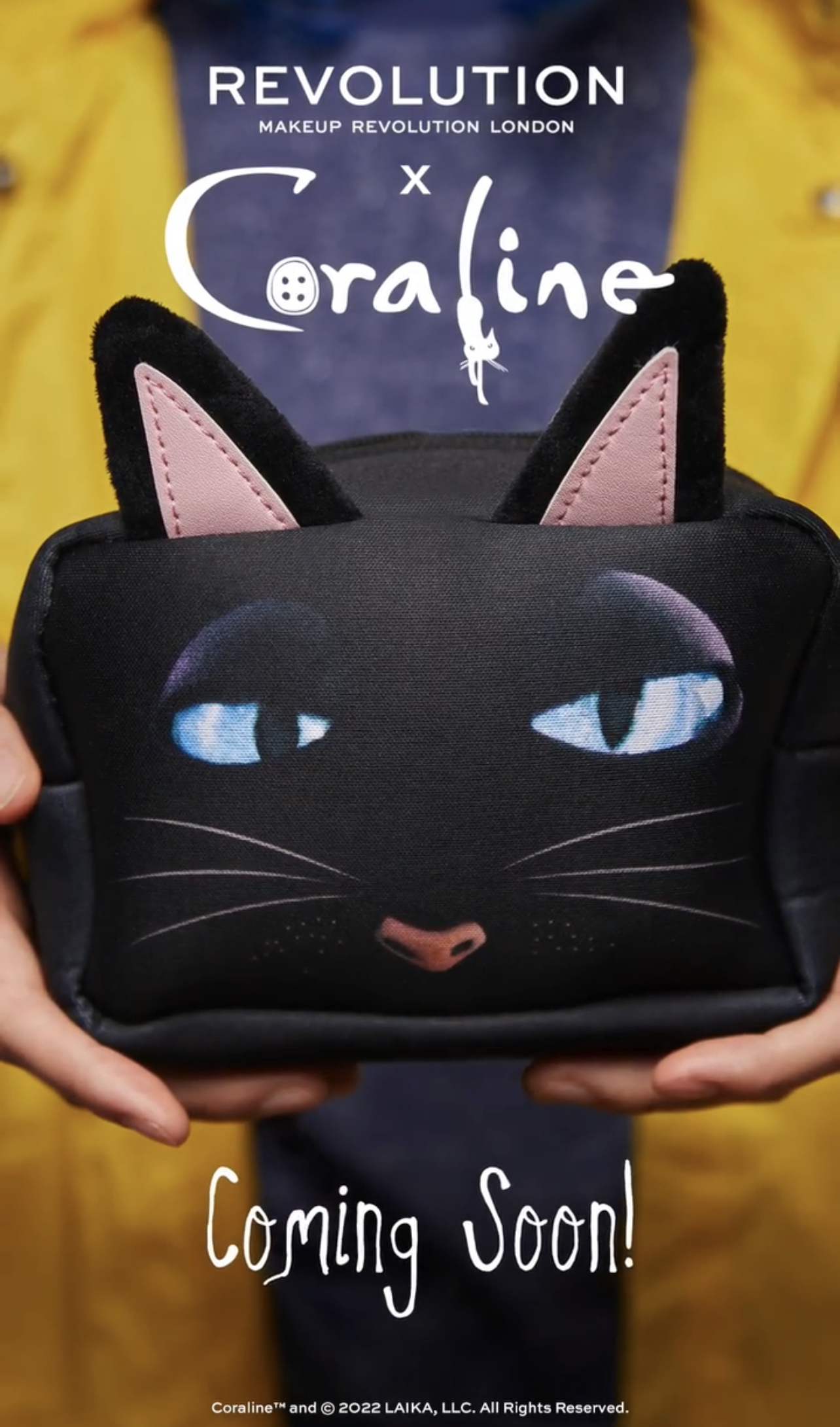 If you like the look of this Coraline x Revolution Halloween Collection, it launches today, and will be available right here.

*If you order from the Revolution USA website, you can get 20% discount on everything with the code MUDDLE*