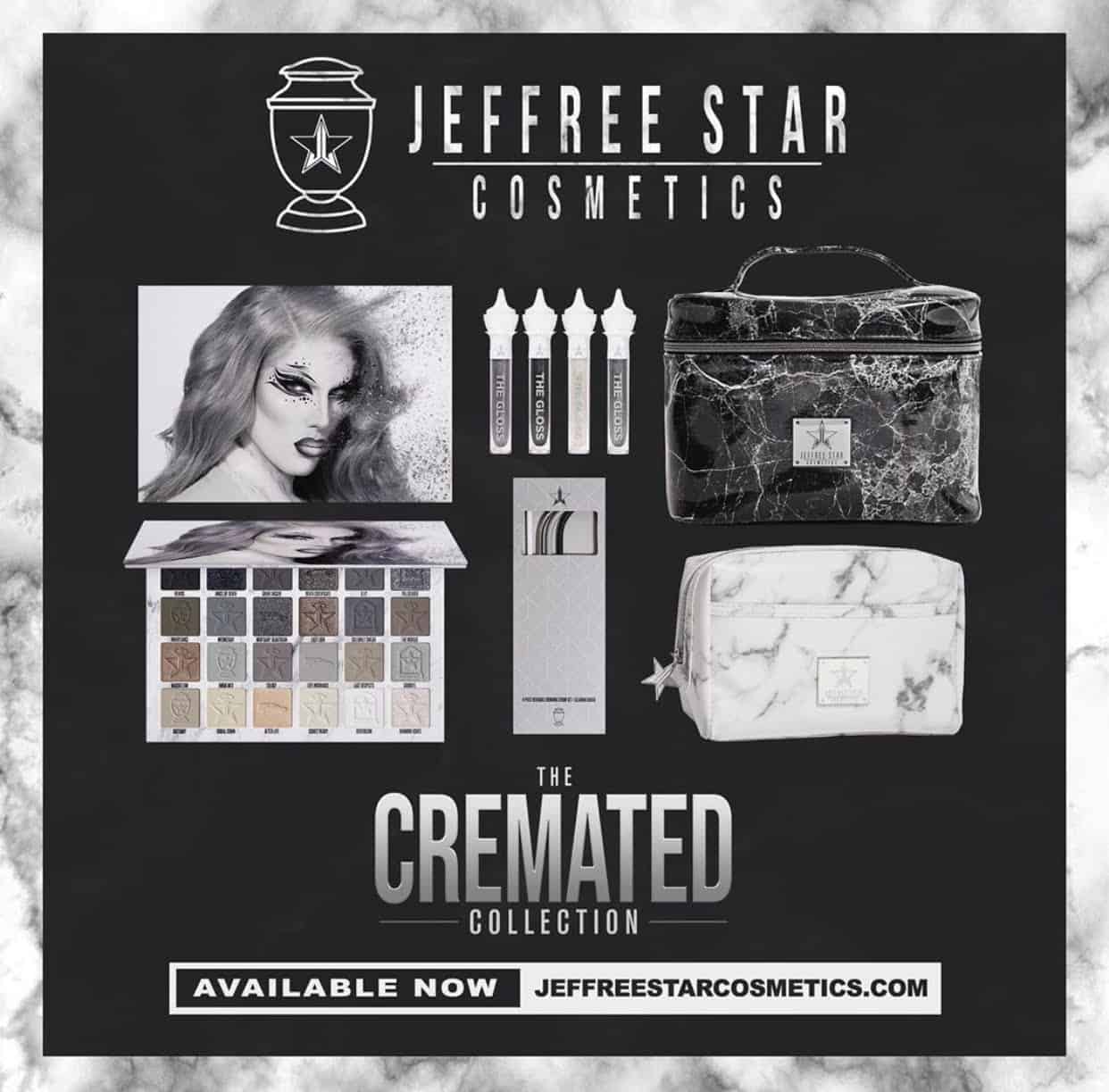 Everybody knew it was going to be an eyeshadow palette from the hints that he gave everyone, but it’s a surprise that it’s actually a whole collection which will please JSC fans.

I have all the photos, swatches and reveal of everything inside the Jeffree Star Cremated Eyeshadow Palette collection so keep on reading to see all the products that feature within this new gothic inspired collection, and their swatches too. 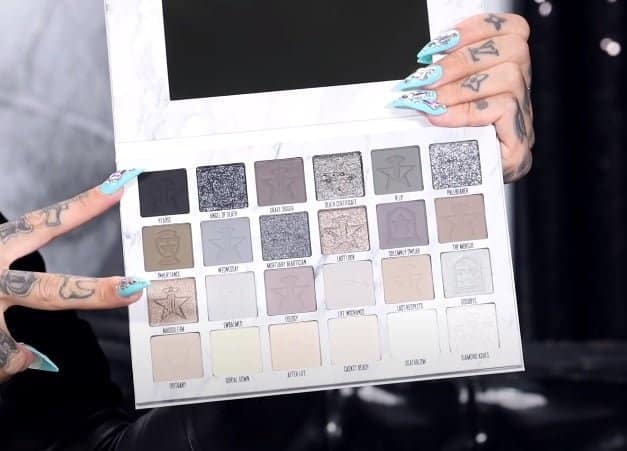 Jeffree Star has been teasing us with sneak peeks of his newest palette which he officially revealed today on his YouTube channel.

It’s unlike anything people had been speculating, as they assumed mostly it would be a green theme palette, but it’s actually the perfect greyscale palette, and I love the colour story. 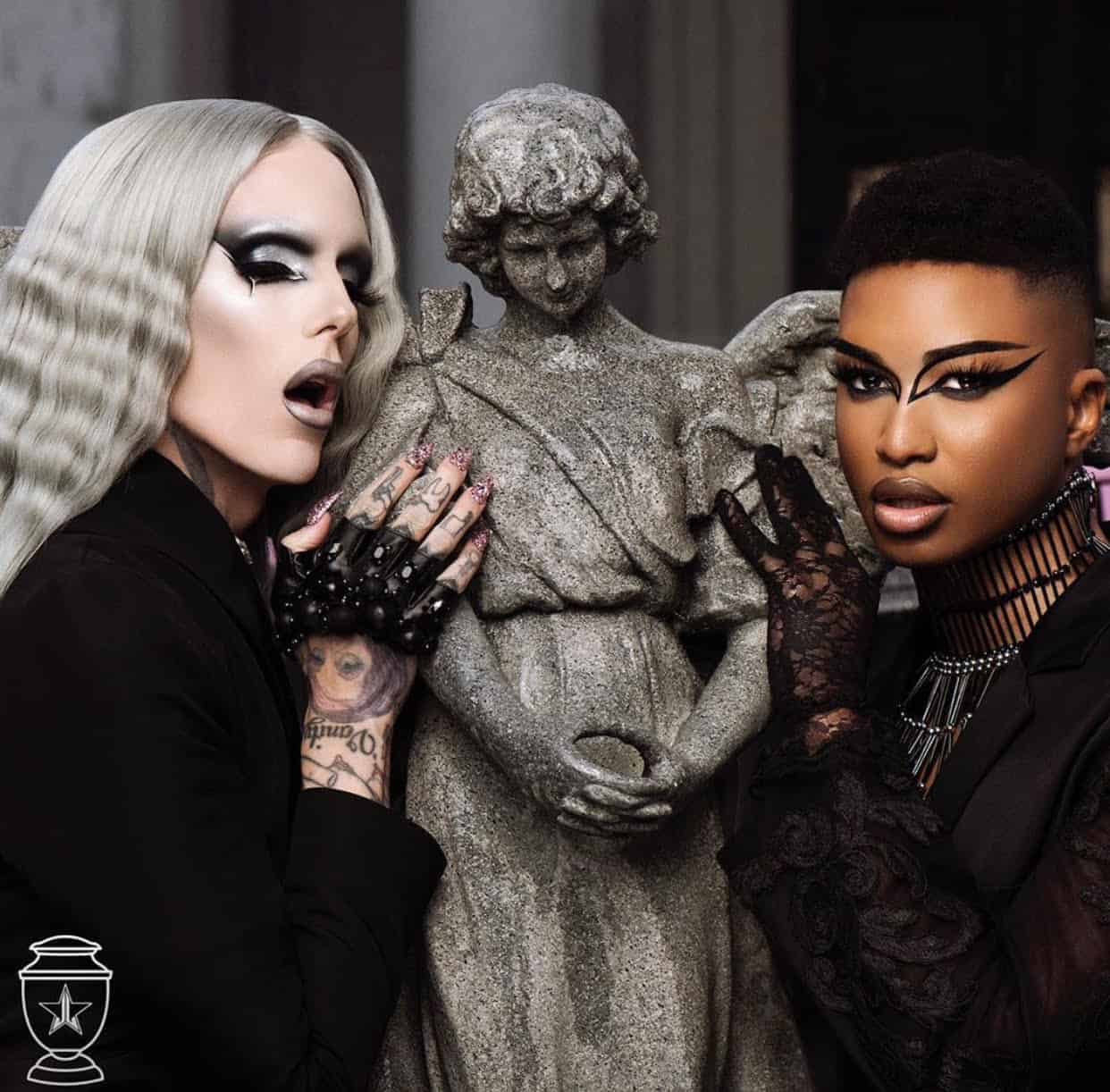 The name has caused a little controversy, but Jeffree’s aesthetic is controversial, and he’s not for everyone.

It can take years to create and manufacture a palette, so Jeffree would have developed this palettes way before the global crisis happened.

He didn’t create the Jeffree Star Cremated Eyeshadow Palette to upset people, but there’s always going to be someone offended by the shade names he uses. 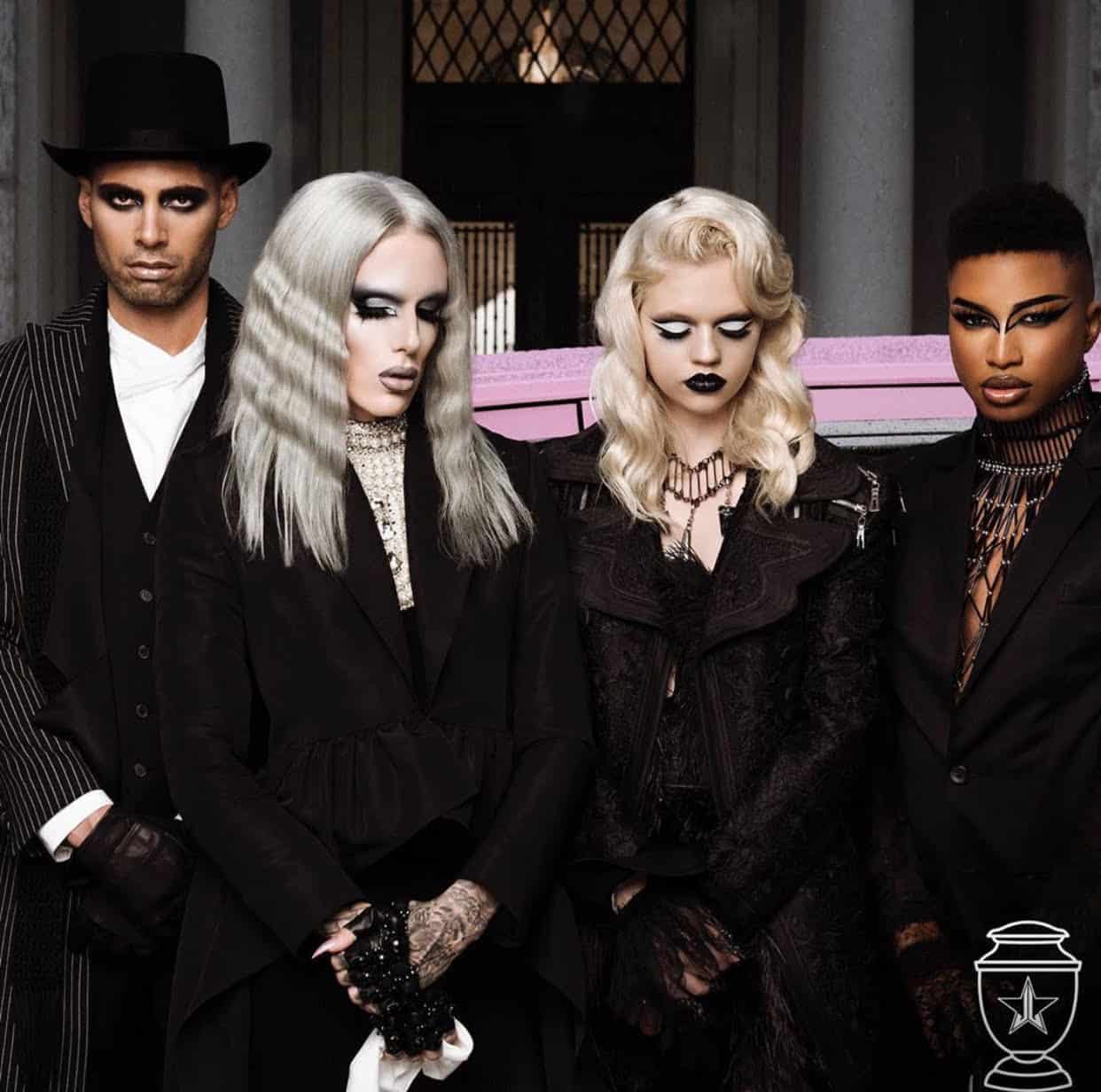 Jeffree said “The Jeffree Star Cremated Eyeshadow Palette is the gothic dream palette you never knew you needed“. This collection launches MAY 22nd exclusively on the Jeffree Star website. 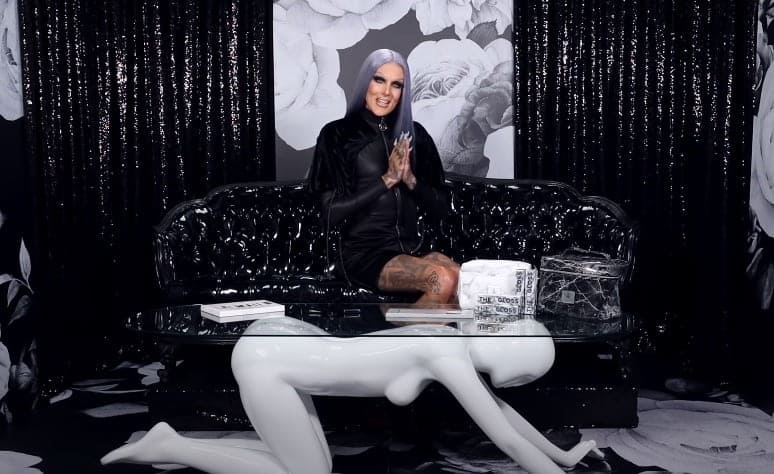 His last palette launch was the Blood Lust Palette, which had a gorgeous purple theme and regal velvet packaging, but wow the new Jeffree Star Cremated Eyeshadow Palette is seriously on trend with a stunning marble theme across the collection. 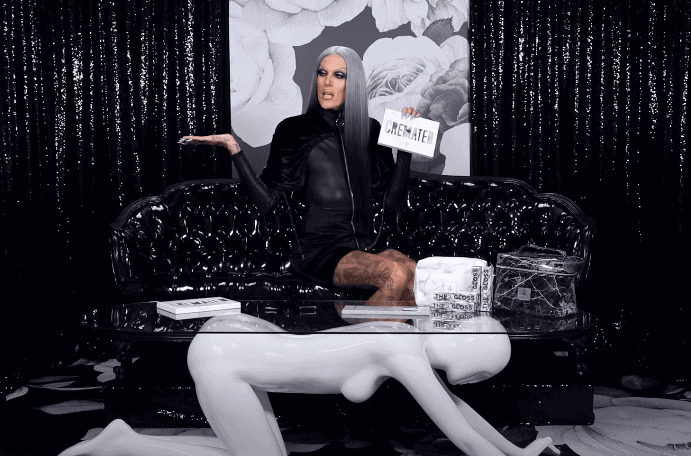 Now Jeffree has officially revealed the new Jeffree Star Cremated Collection, and this collection was supposed to launch in April but due to the global crisis, it had to be pushed back.

He wanted to create a very gothic and very dark Spring, but it’s now May, and he’s here for it. 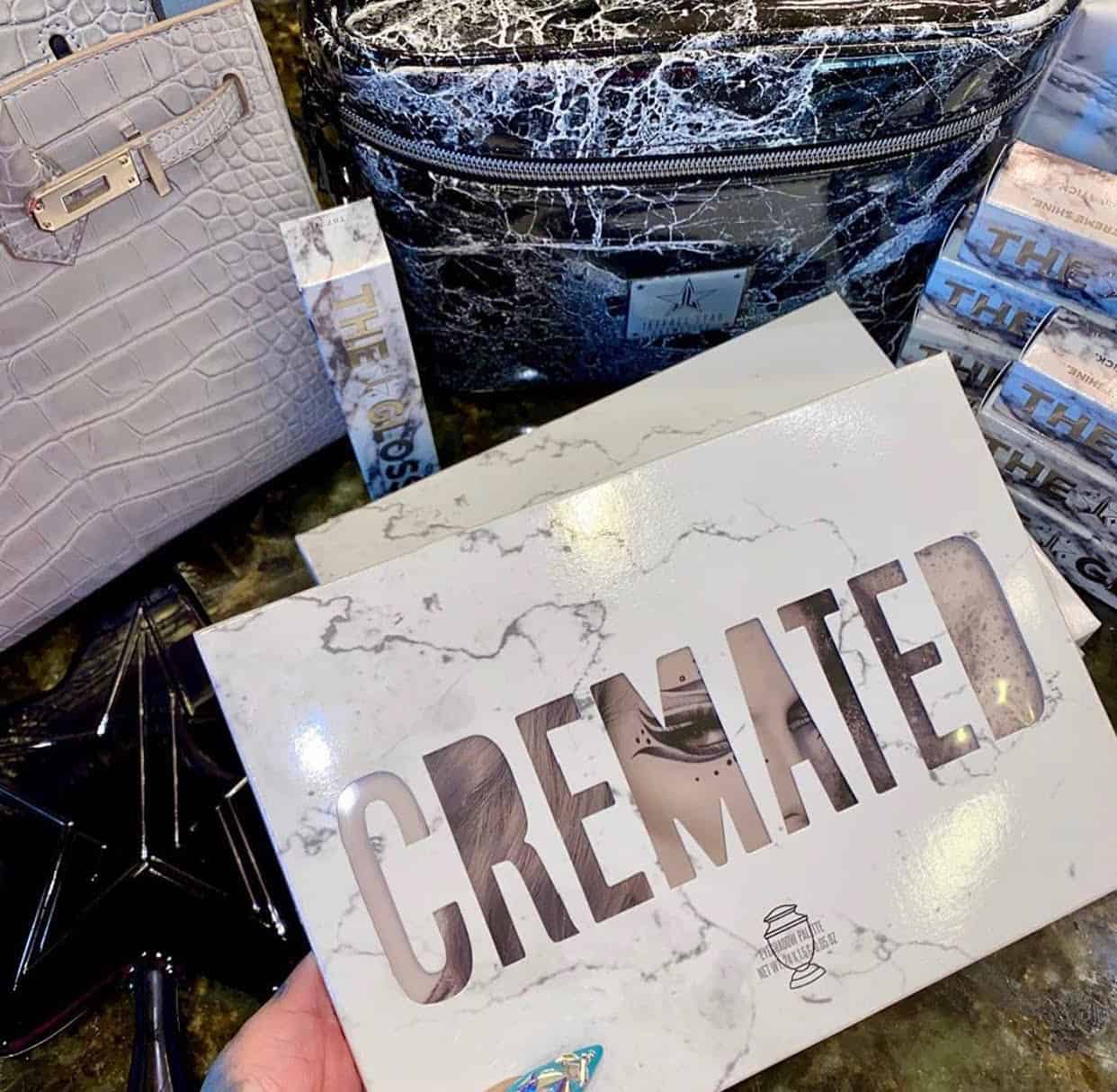 Jeffree revealed that the Jeffree Star Cremated Eyeshadow Palette is not just a palette launch, it’s a whole collection, and he said that this palette is his favourite palette he’s ever launched. 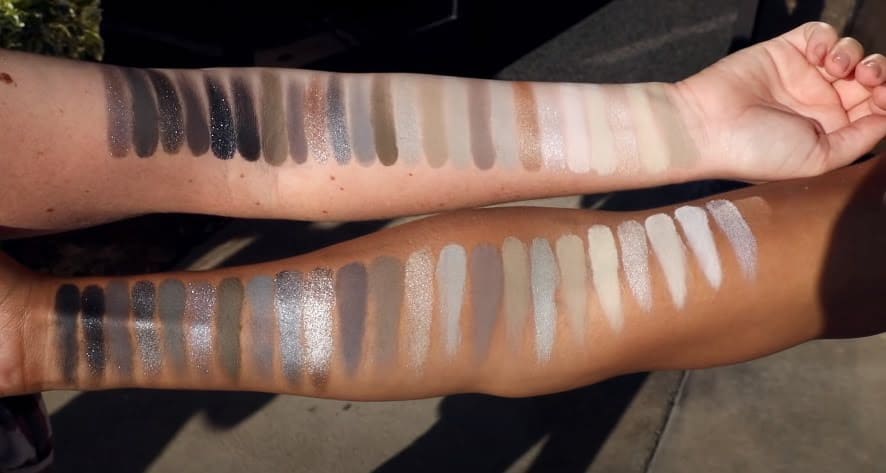 Jeffree confirmed that he would be launching a nude palette during 2020, so we all thought this Jeffree Star Cremated Eyeshadow Palette would be the nude palette but it isn’t, however I feel like it is pretty nude overall but he has promised a proper nude palette soon. 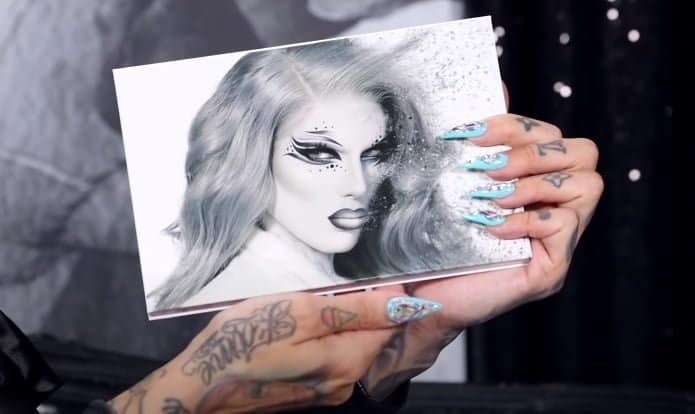 The meaning behind ‘Cremated’ is a double entendre, as it’s very dark and gothic but it’s also a term that he likes to use when you’re really blown away by something. 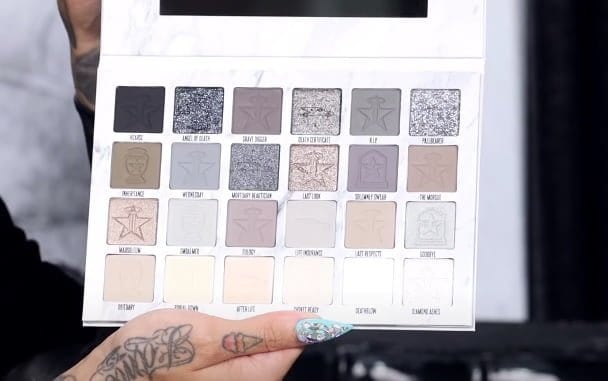 But this is NOT his nude palette, but he said he “promises” he will make that happen.

This palette is something Jeffree says has never been done before, and is one of a kind!

This is the anthesis of his colourful Jawbreaker palette, and it’s going to give you smokey eye palette dreams. 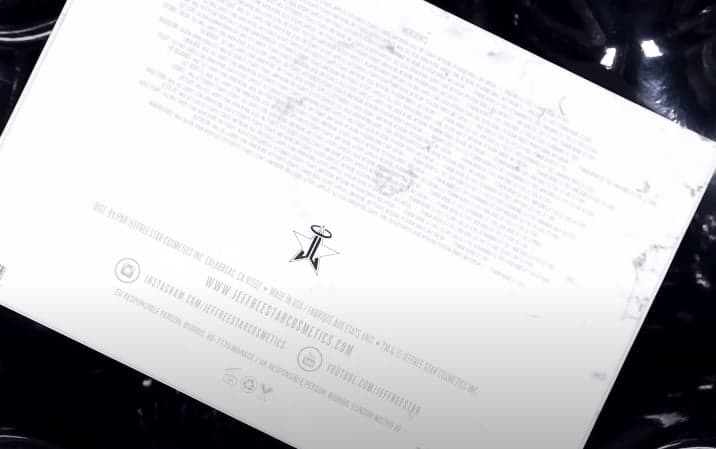 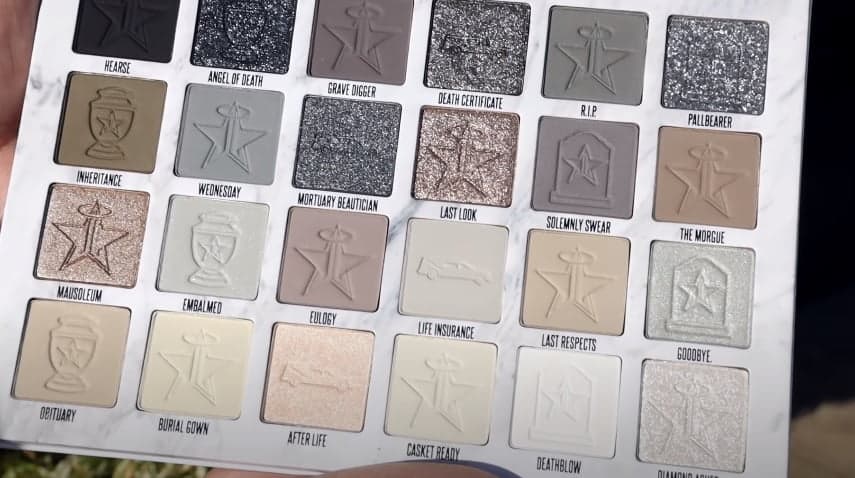 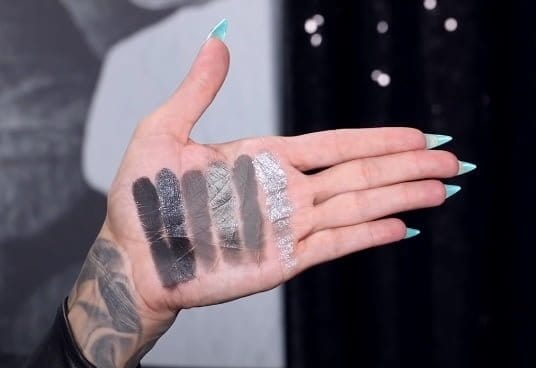 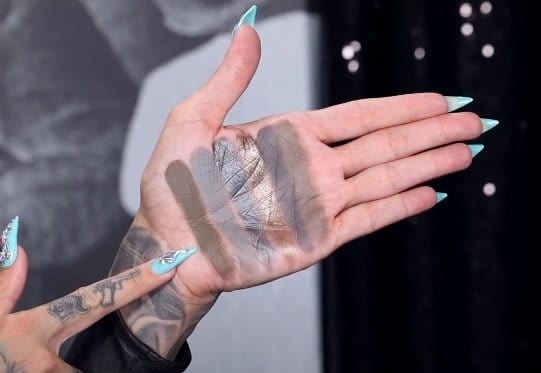 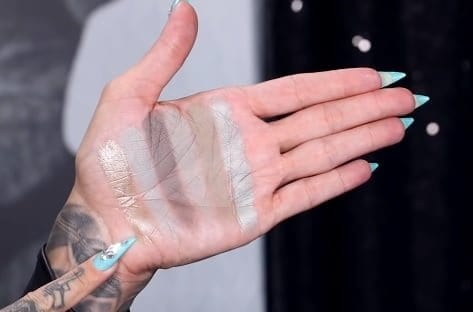 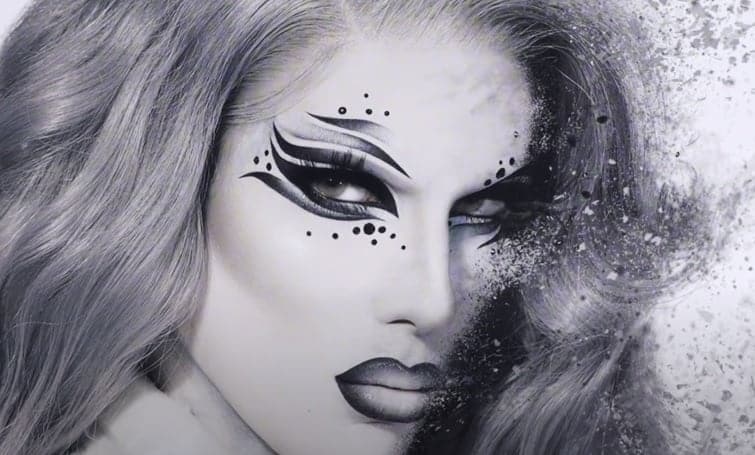 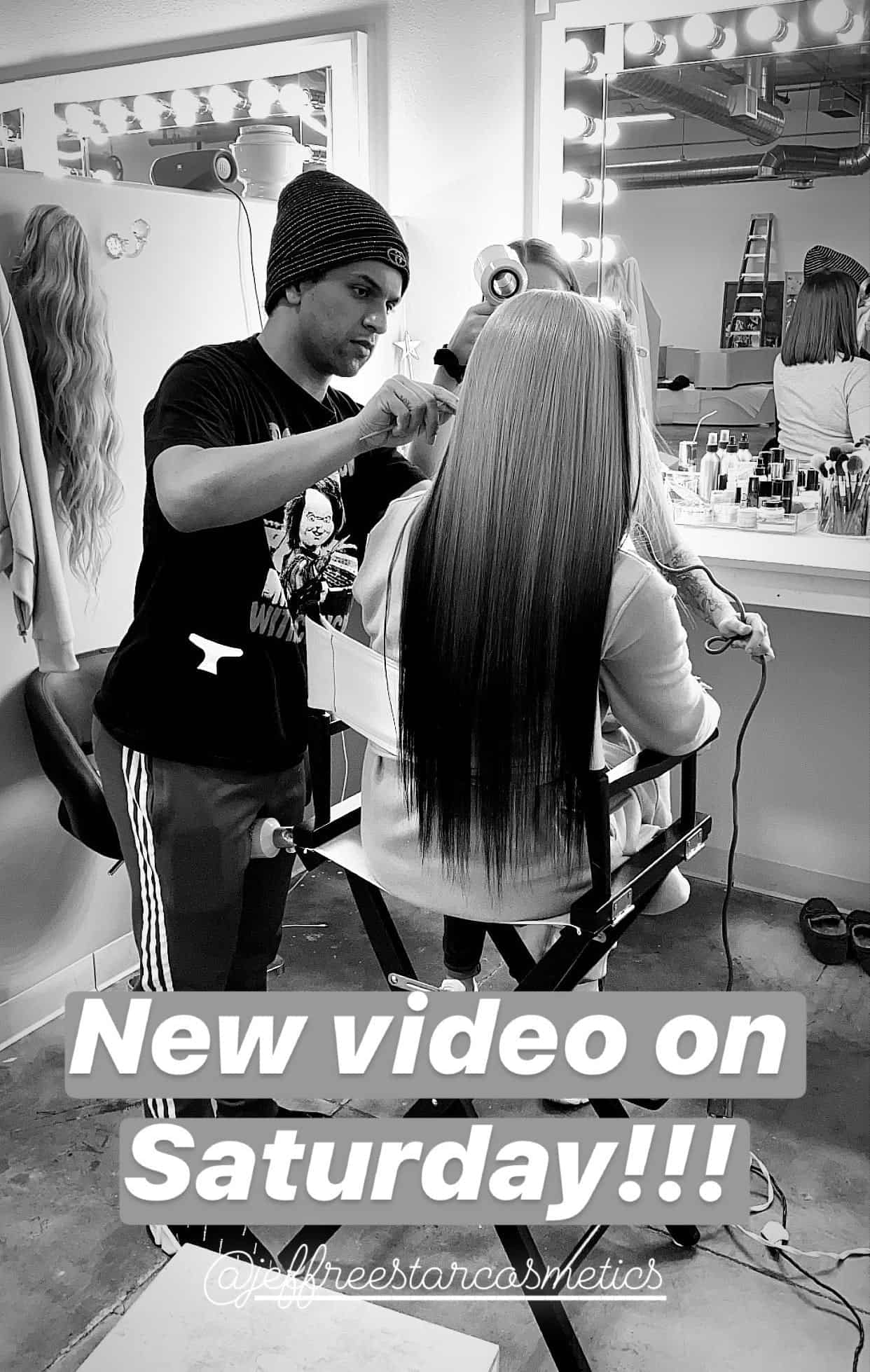 The Jeffree Star Cremated Collection has a seriously amazing marble effect to the packaging, and the photo shows the palette as well as a stack of The Gloss lip glosses, both of which have the same marble print packaging.

“Introducing the #CREMATED eyeshadow palette & collection!!!! ⚱️ This one of a kind spooky 24 pan gothic dream will wake up the makeup world! The FULL reveal video will be on Jeffree’s channel TOMORROW morning!!!! ? Get ready to be deceased. Extreme payoff. With our iconic mattes & new extreme sparkle metallic formula ?©️ #jeffreestarcosmetics #vegan #crematedpalette“ 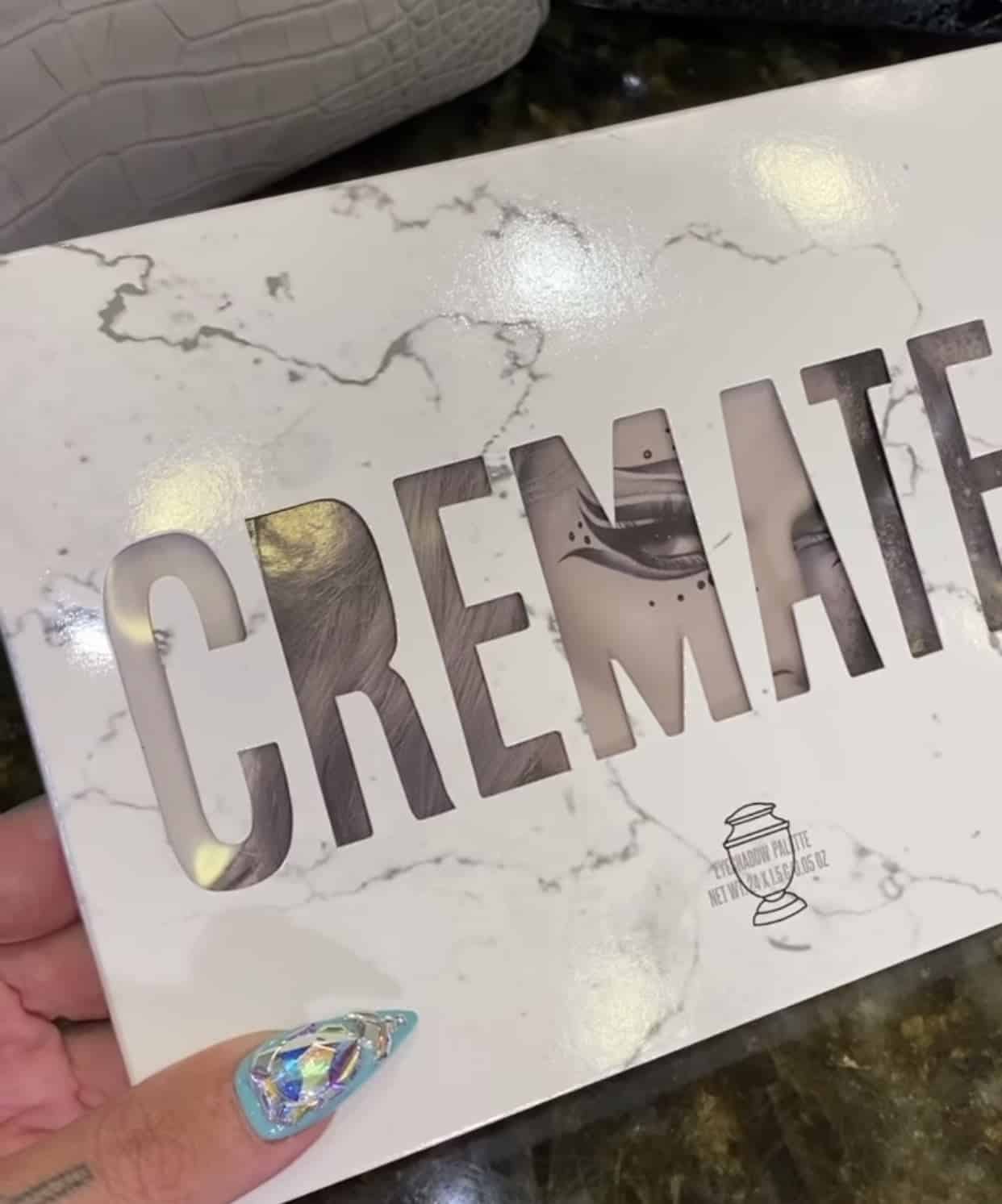 On the front of the packaging, there’s even a little cremation urn with the product weight information written on top of it which is such a Jeffree touch. 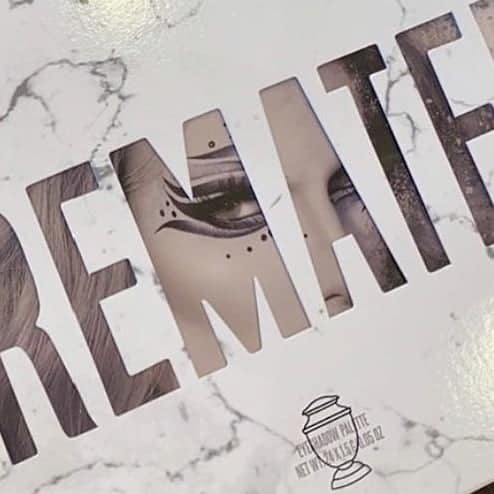 This palette contains 24 eyeshadows that each contains 1.5g (0.05oz) of product which is a really generous size for an eyeshadow – that’s more per shadow than there is in an individual MAC eyeshadow.

I love the packaging so much, it has cut out letters for Cremated with an image of Jeffree under the cut outs. 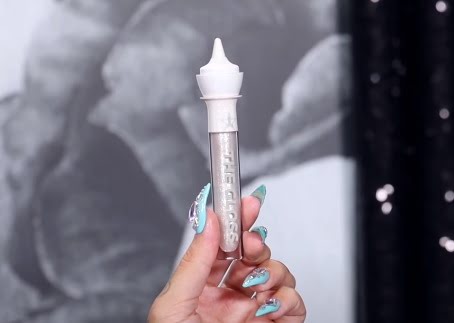 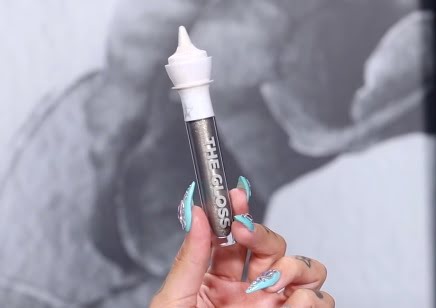 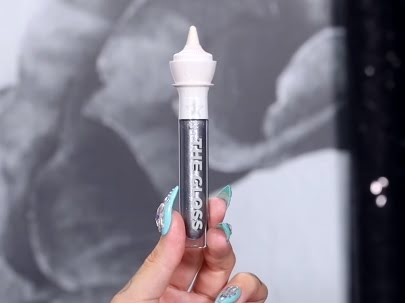 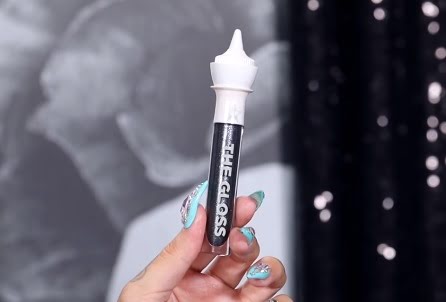 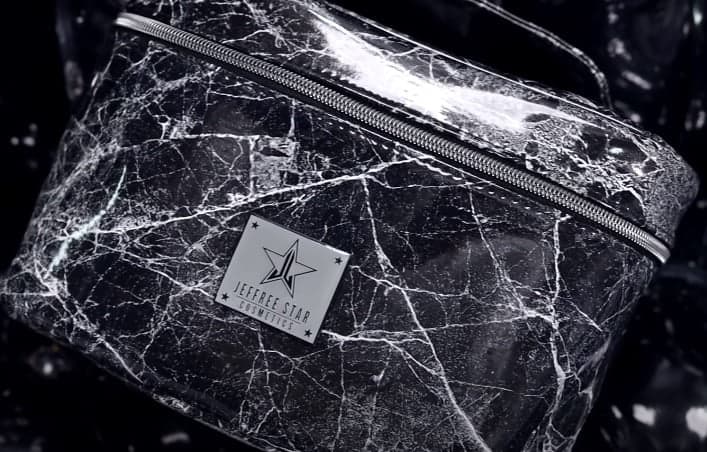 Then we have the two makeup bags within the collection, with one white marble bag and one black marble bag. They look incredible, and I want that black one.

Jeffree said he uses these every time he travels, as they’re so useful and hold so much makeup. 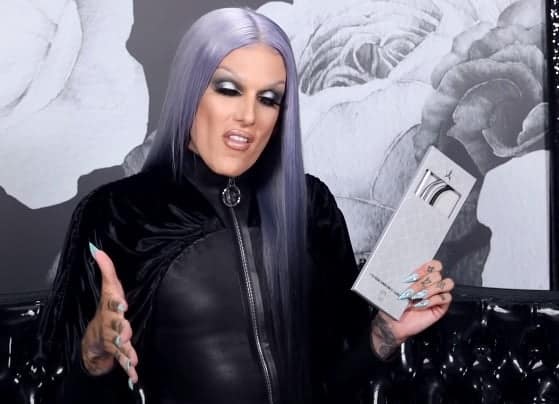 The last piece in the Jeffree Star Cremated Collection is this Cremated Straw Set. He always launches these metal straws, and each set includes three different metal straws as well as a cleaning brush too.

This isn’t something I’d personally be interested in, as I’m all about the Jeffree Star Cremated Eyeshadow Palette, but if you do like his straws, this new set is launching within the collection. 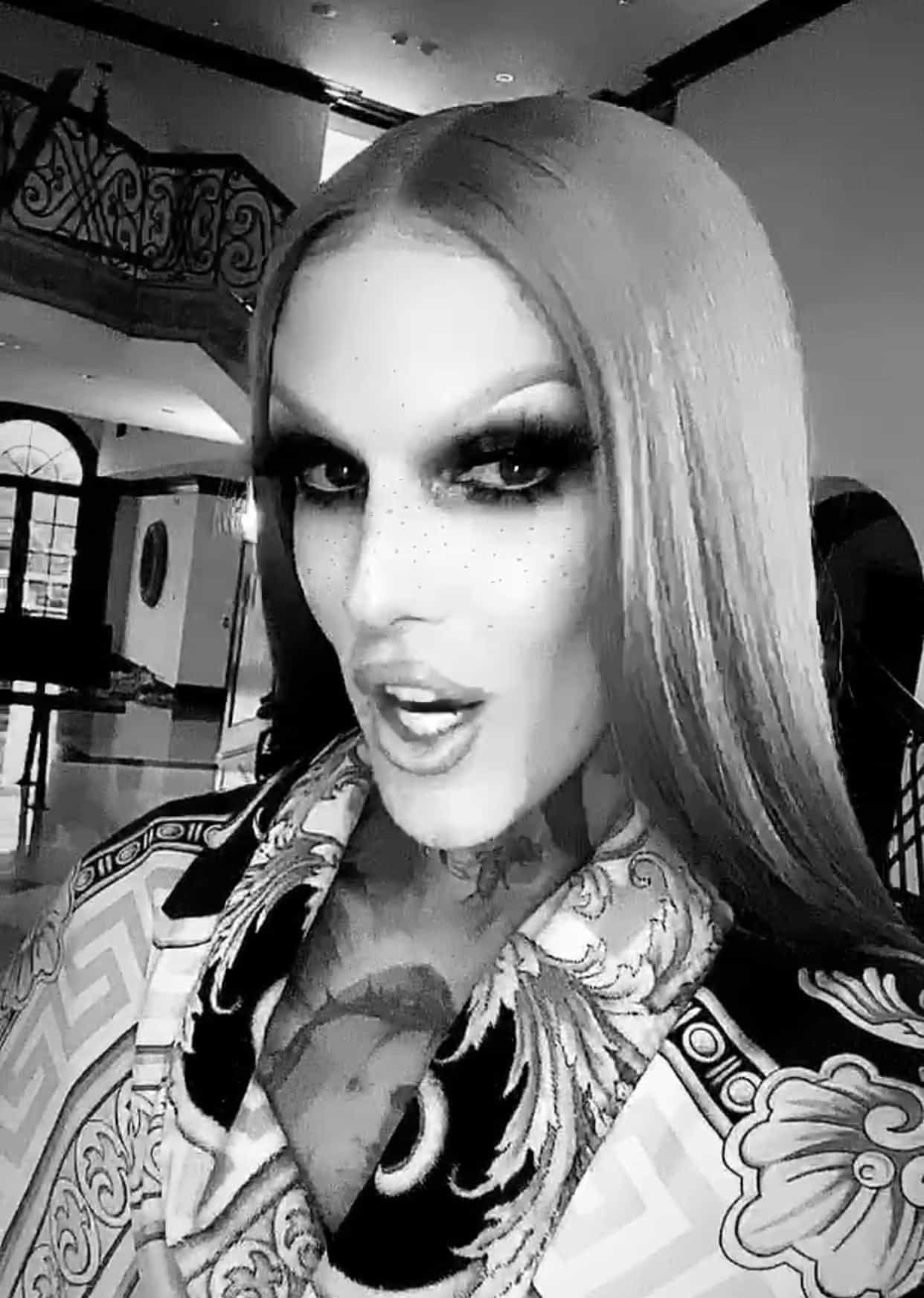 I am SO excited about the Jeffree Star Cremated Eyeshadow Palette. I love smokey eyes, and it’s one of my favourite makeup looks to wear, so I will 100% be purchasing this palette.

The glosses are a little too out there for my personal liking, but they do look super pretty in the swatches, and I like the special grey and white pearlised packaging that’s been created especially for this collection.

Whilst it is a little disappointing that the Jeffree Star Cremated Eyeshadow Palette isn’t the nude palette we all thought it would be, it’s a STUNNING palette and I love the range of tones and finishes.

The shimmers look out of this world, and the different pan stamps are a little cute too – if a hearse stamp can be cute?

All images belong to Jeffree Star.