It’s been over a month since the launch of the Jeffree Star Mascara and spring mystery boxes, and now the Jeffree Star Cosmetics Single Eyeshadows Collection has been revealed as being the brand’s latest launch, which is launching next week, and Jeffree sneak peeked the collection on his Instagram. 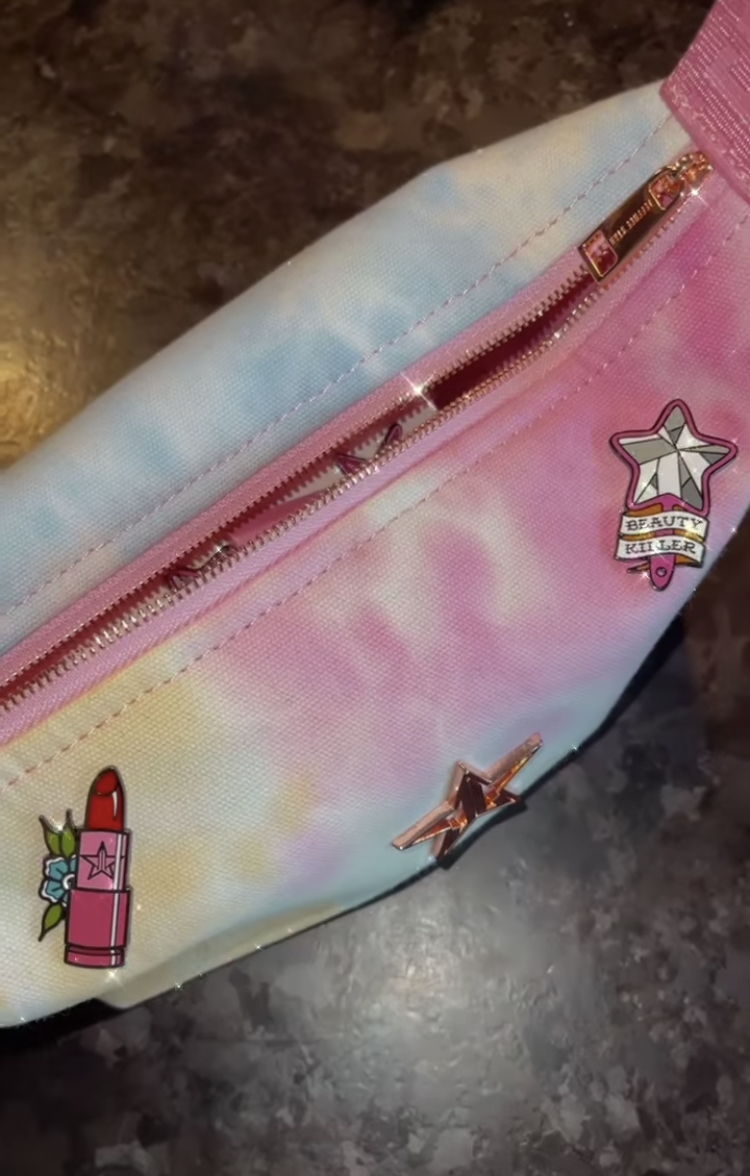 It’s such a cute bag, with a rose gold JS logo in the centre of a star, and then there’s some tattoo style pin badges on the bag of a lipstick and a mirror. The bag also has a rose gold zip too, which complements the rose gold star on the front of the bag. 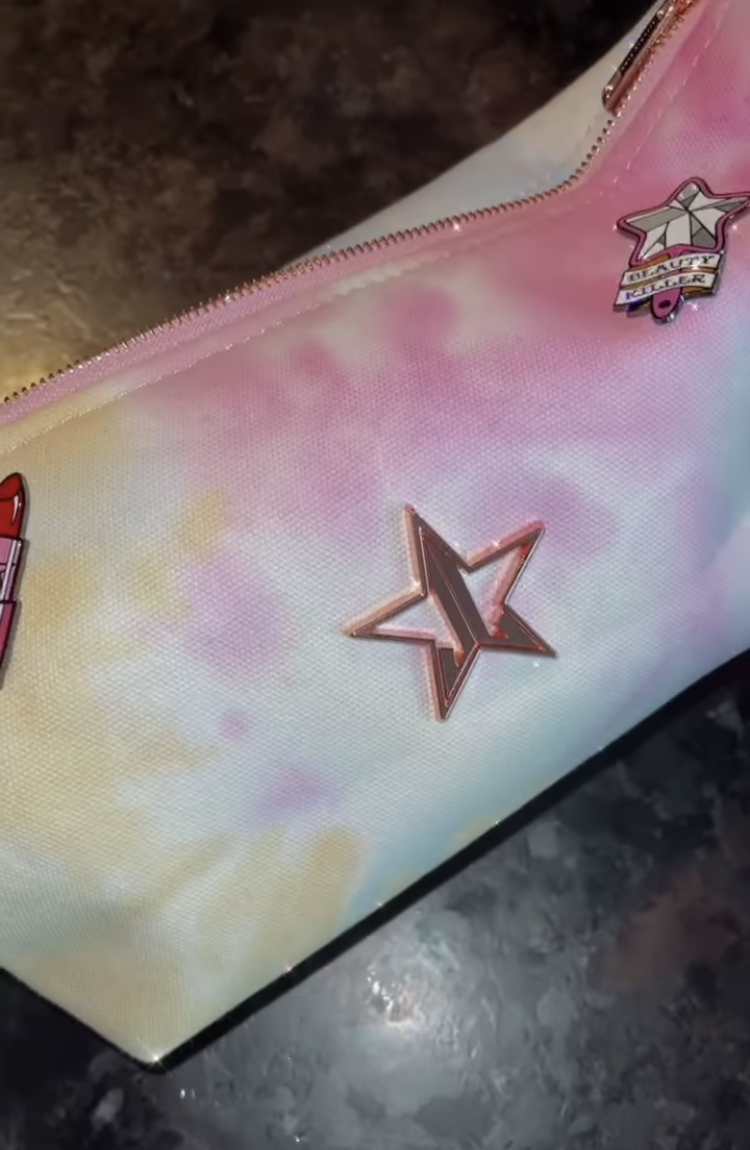 Jeffree hasn’t mentioned whether this makeup bag will be available for sale, but I’d assume so if he’s shown the bag as part of the Jeffree Star Cosmetics Single Eyeshadows Collection announcement. 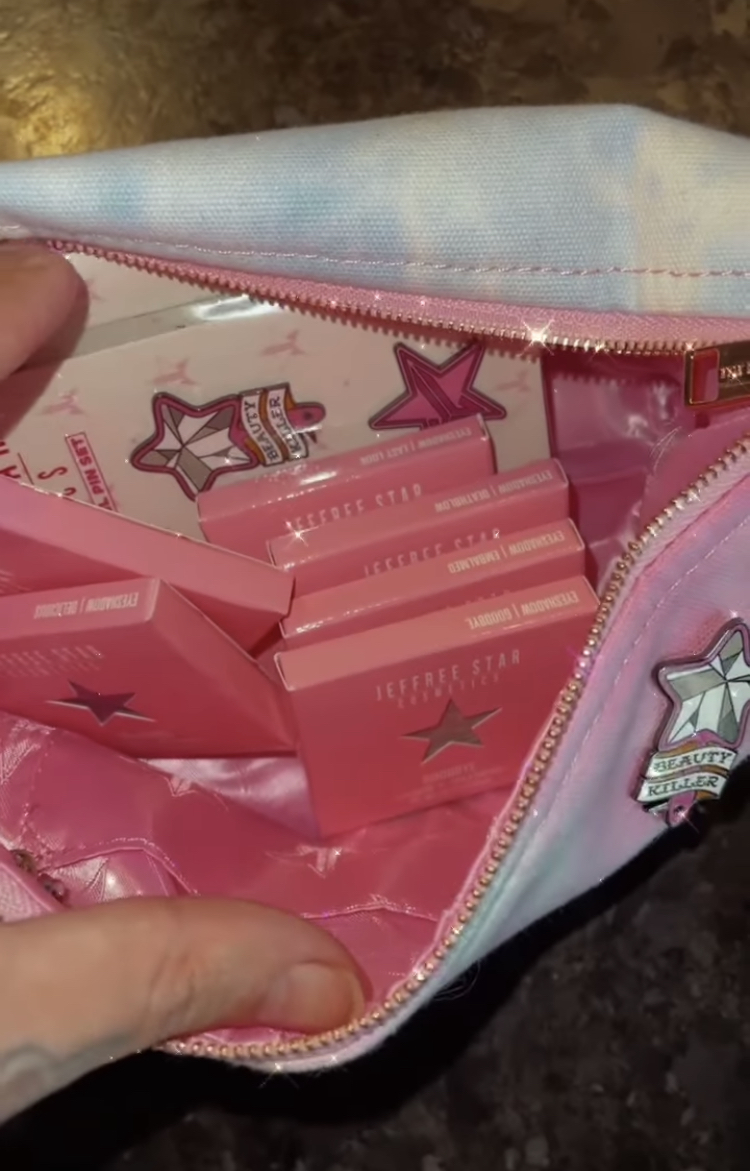 Jeffree shared the inside of the makeup bag, which has a pink satin lining, and showcased the brand new Jeffree Star Cosmetics Single Eyeshadows, each of which are individually packaged within bright pink cardboard square boxes.

Inside the bag, amongst the single eyeshadows, you can see a packet which says Pin Set, so it looks like Jeffree will be launching a set of tattoo style pins – as shown by the badges on the front of the tie dye makeup bag. 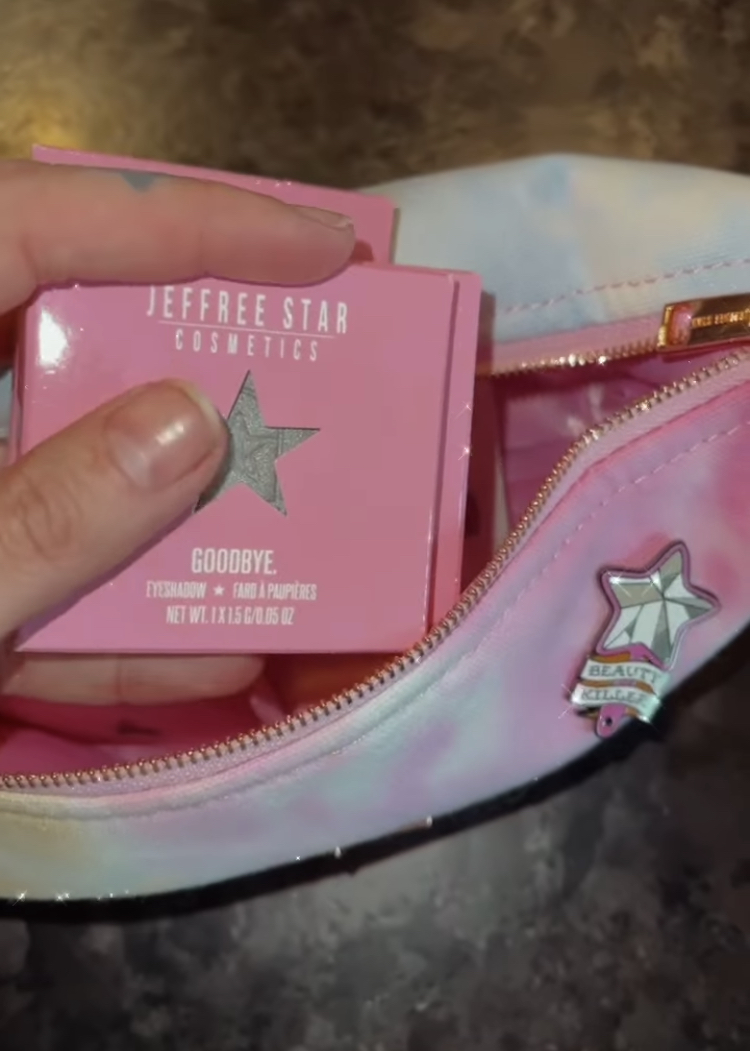 “YESSSSS the rumors are true… 😇 We are FINALLY releasing#single eyeshadows!!! Next week we are launching our first batch! Over the next few months we will release more colors from all of your favorite palettes and (even) some discontinued shades as well! 💖🔥“ 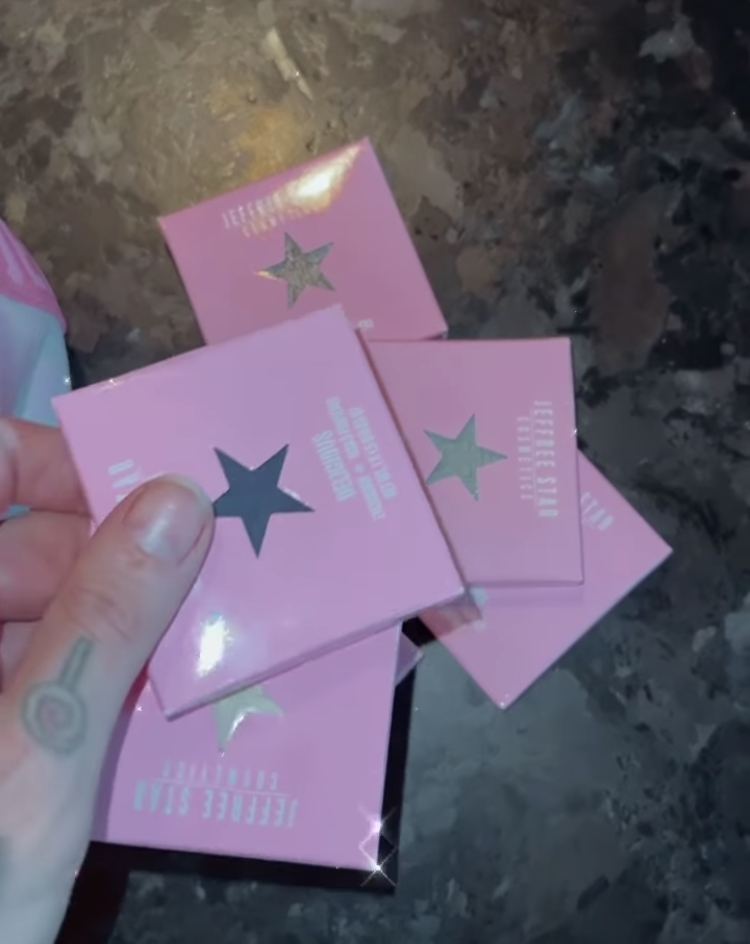 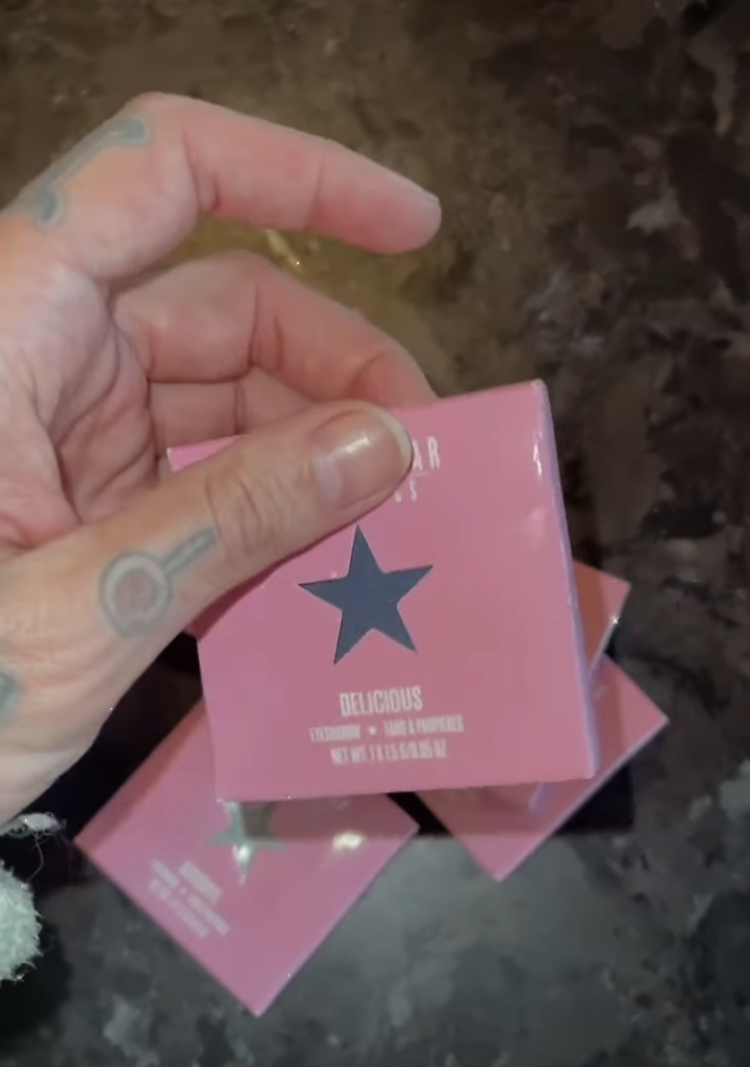 The Jeffree Star Cosmetics Single Eyeshadows Collection will include single shadows from palettes which have been discontinued, as well as favourites, so you’ll be able to get your hands on shades you love, rather than purchasing the full size palette. 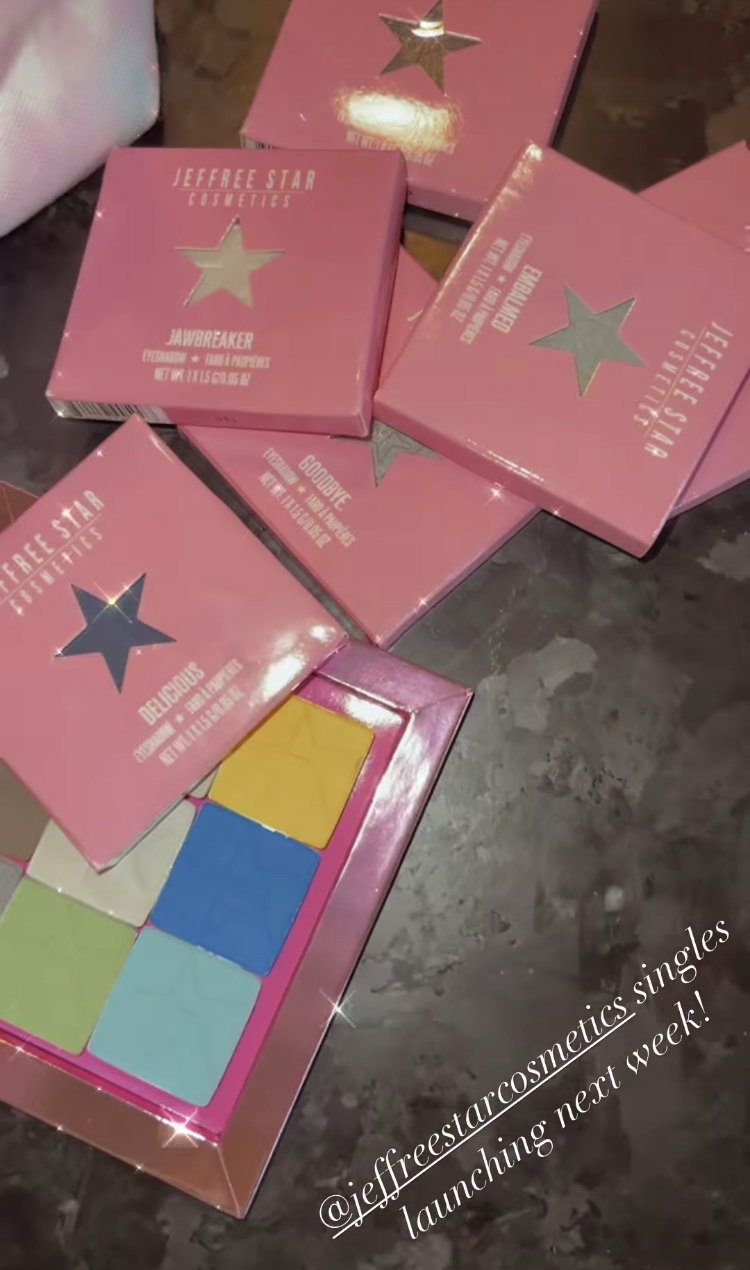 Jeffree has also sneak peeked a magnetic palette, which you’ll be able to purchase to keep your favourite Jeffree Star single eyeshadows inside. 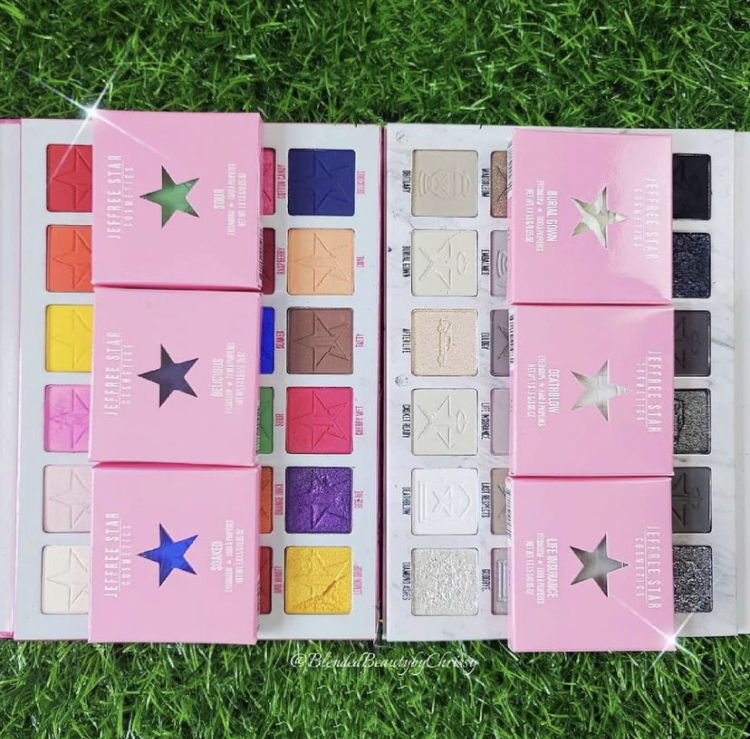 So which shades do we know are launching? The full line-up is yet to be revealed, but so far we know the shades will include:

Each of the shades within the Jeffree Star Cosmetics Single Eyeshadows Collection will be magnetic, so you can add them to your Z Palettes or magnetic palettes, and they each contain 1.5g of product, so they’re the same size of the shadows in the full size palettes.

I’ll share more information on the single shadows as soon as it’s revealed, but I think this is a great idea for the brand. Whenever Jeffree launches a palette, you might love a few shades and not want the full palette, so being able to purchase the single shades you love is ideal. 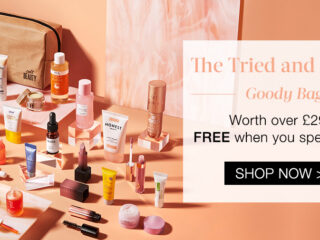