The By Terry VIP Expert Paris Mon Amour Palette launched back in December, and it wasn’t a palette I was initially drawn too. I’d heard great things about the By Terry eyeshadow formula, and I adore their Ombre Blackstar Cream Eyeshadow Sticks, but for £48, it really didn’t wow me enough to want to spend nearly fifty pounds on it. 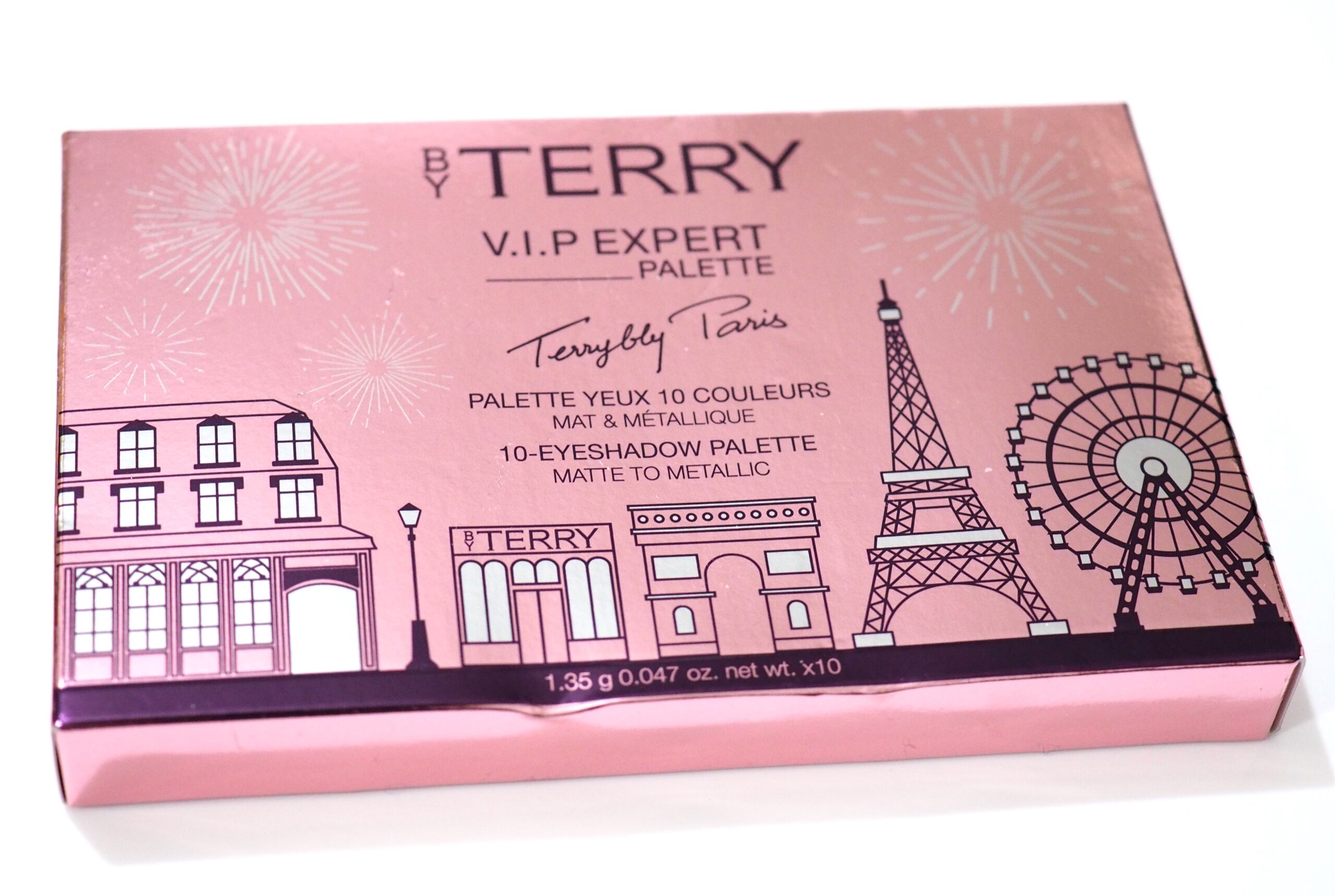 However, the By Terry VIP Expert Paris Mon Amour Palette was included within a 40% off deal back in April, and for £28.80, I felt like it was a more reasonable price, and I was excited about trying my first ever By Terry eyeshadow palette. 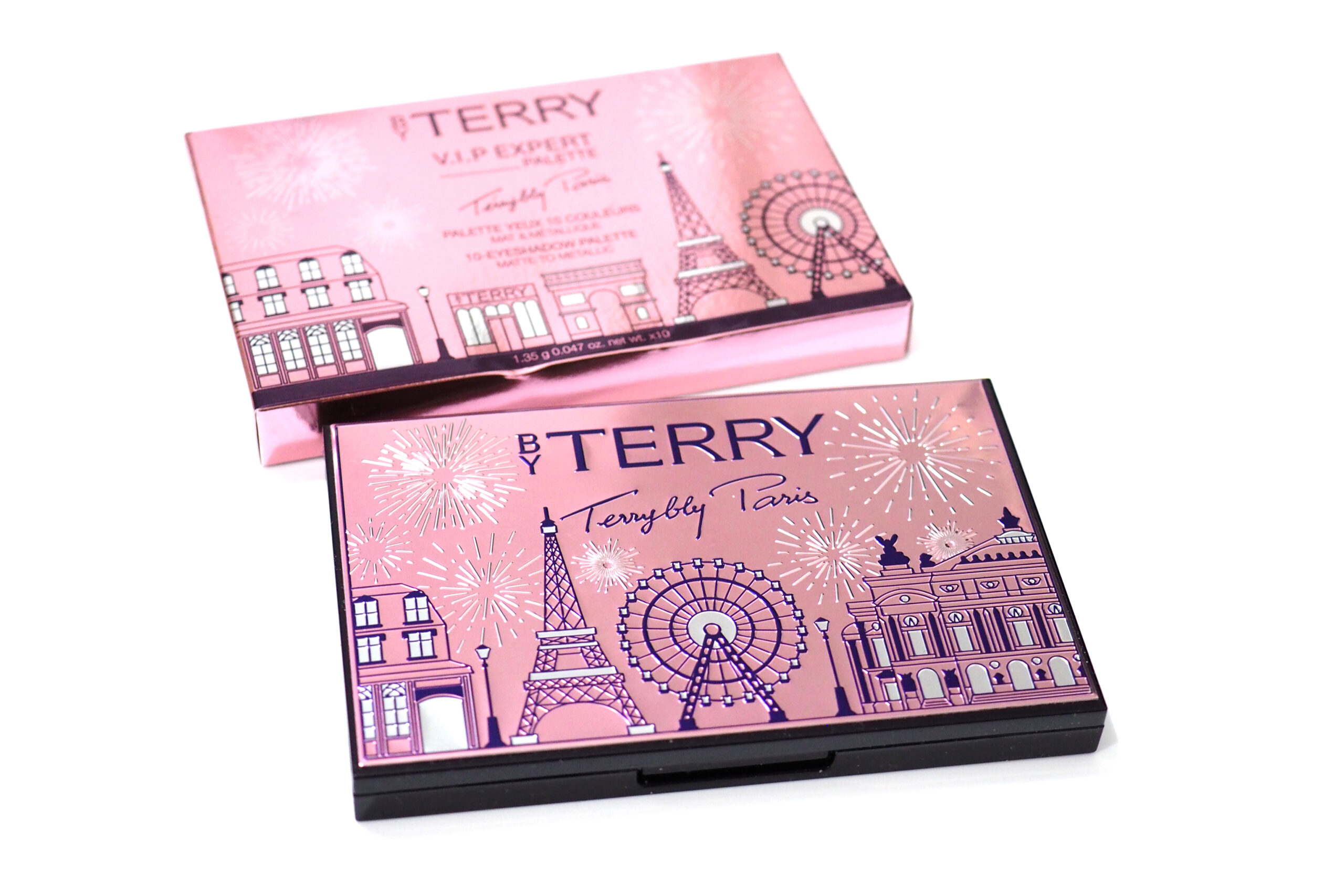 The palette features a mix of rusty pinks, flattering coppers and subtle browns. Includes a double-ended brush for easy application. A collector’s item or an ideal present.“ 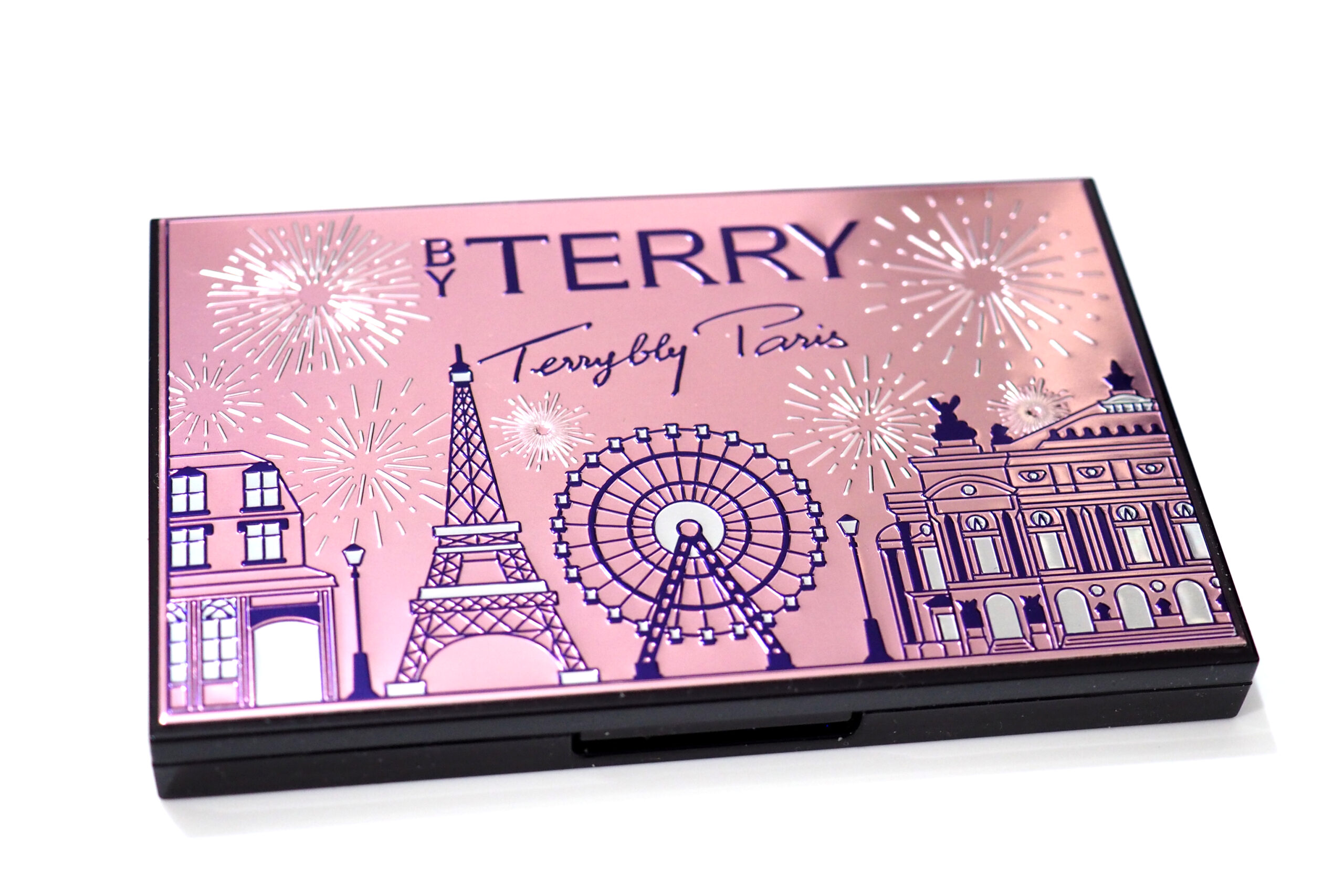 The By Terry VIP Expert Paris Mon Amour Palette is £48 / $56, and contains ten powder eyeshadows, each of which contain 1.35g of product. Inside the palette, you also get a dual-ended eyeshadow brush. 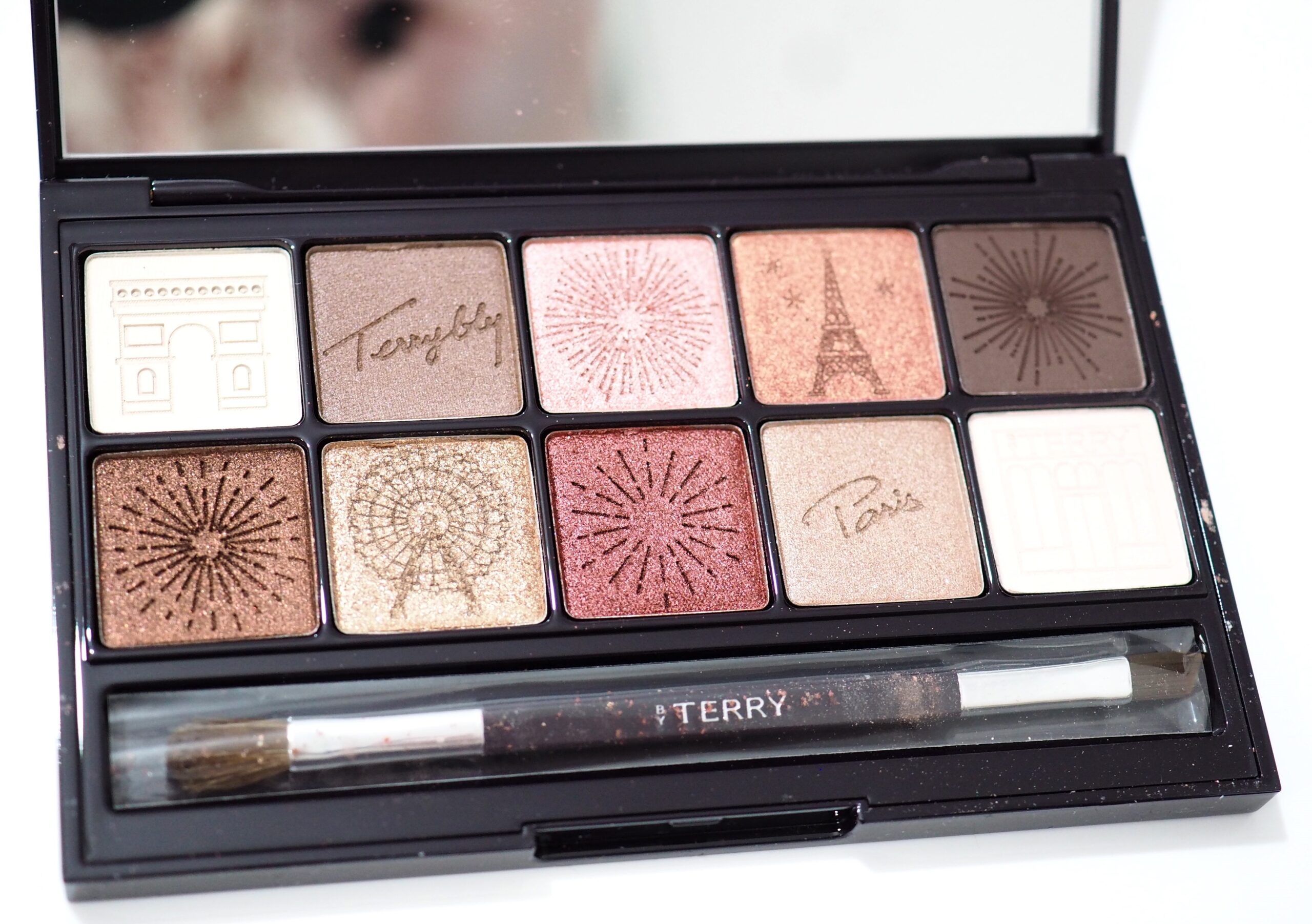 I ordered my By Terry VIP Expert Paris Mon Amour Palette via the By Terry website, and I was really impressed with how beautiful the packaging was of the palette.

It has navy plastic, but on the lid, there’s a rose metal plate with a Paris skyline scene. I thought the design on the lid was plastic, but it is actually metal, and it does feel quite luxe. 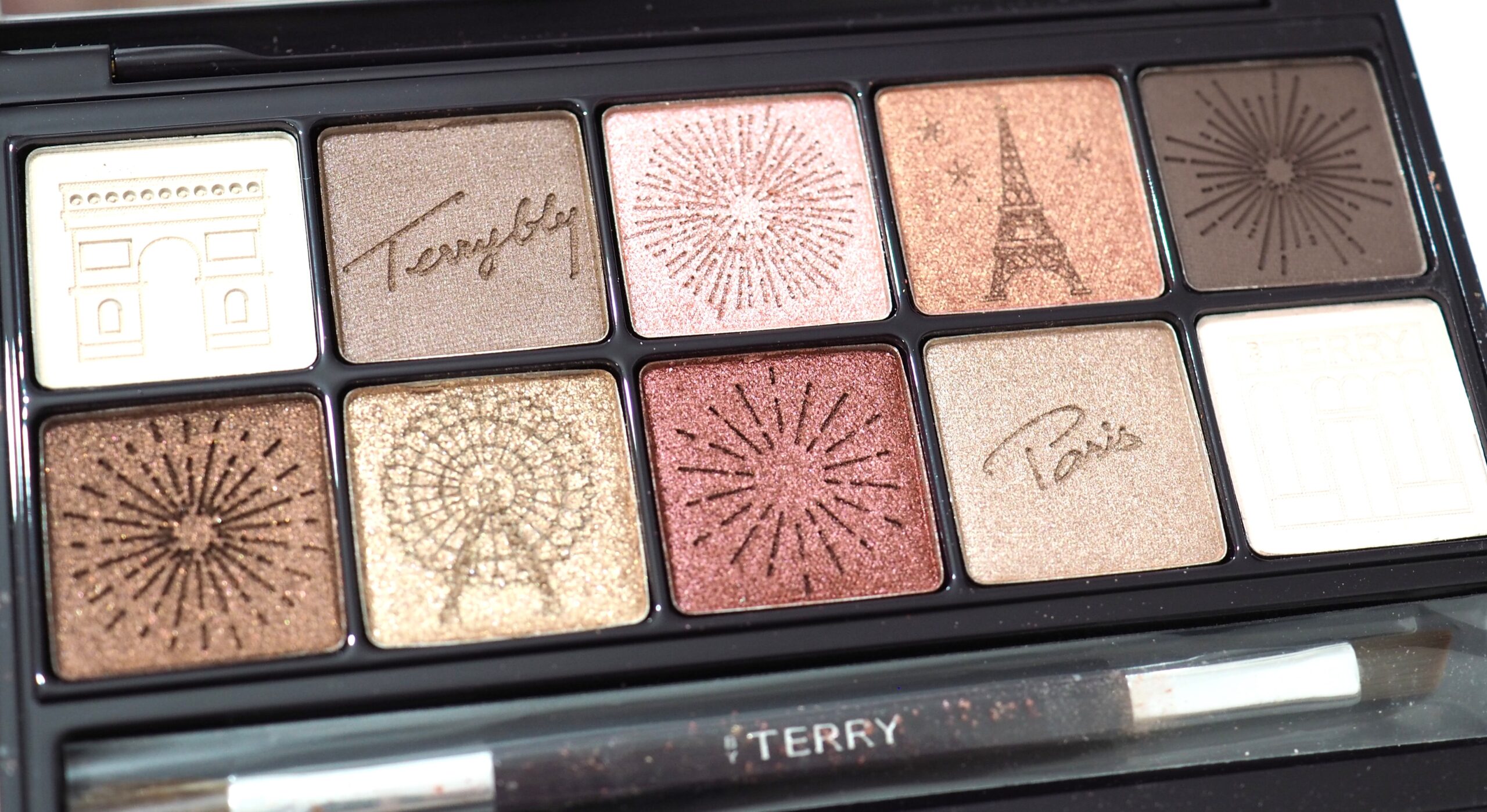 Inside the palette, the ten powder shadows each have a different embossed design, with Paris monuments, fireworks, and the words Paris and Terrybly too.

They’re a nice touch, and it does look pretty before you start to use the shadows, but they disappeared quickly, as they’re very shallow designs.

Let’s take a look at the swatches of the By Terry VIP Expert Paris Mon Amour Palette…. 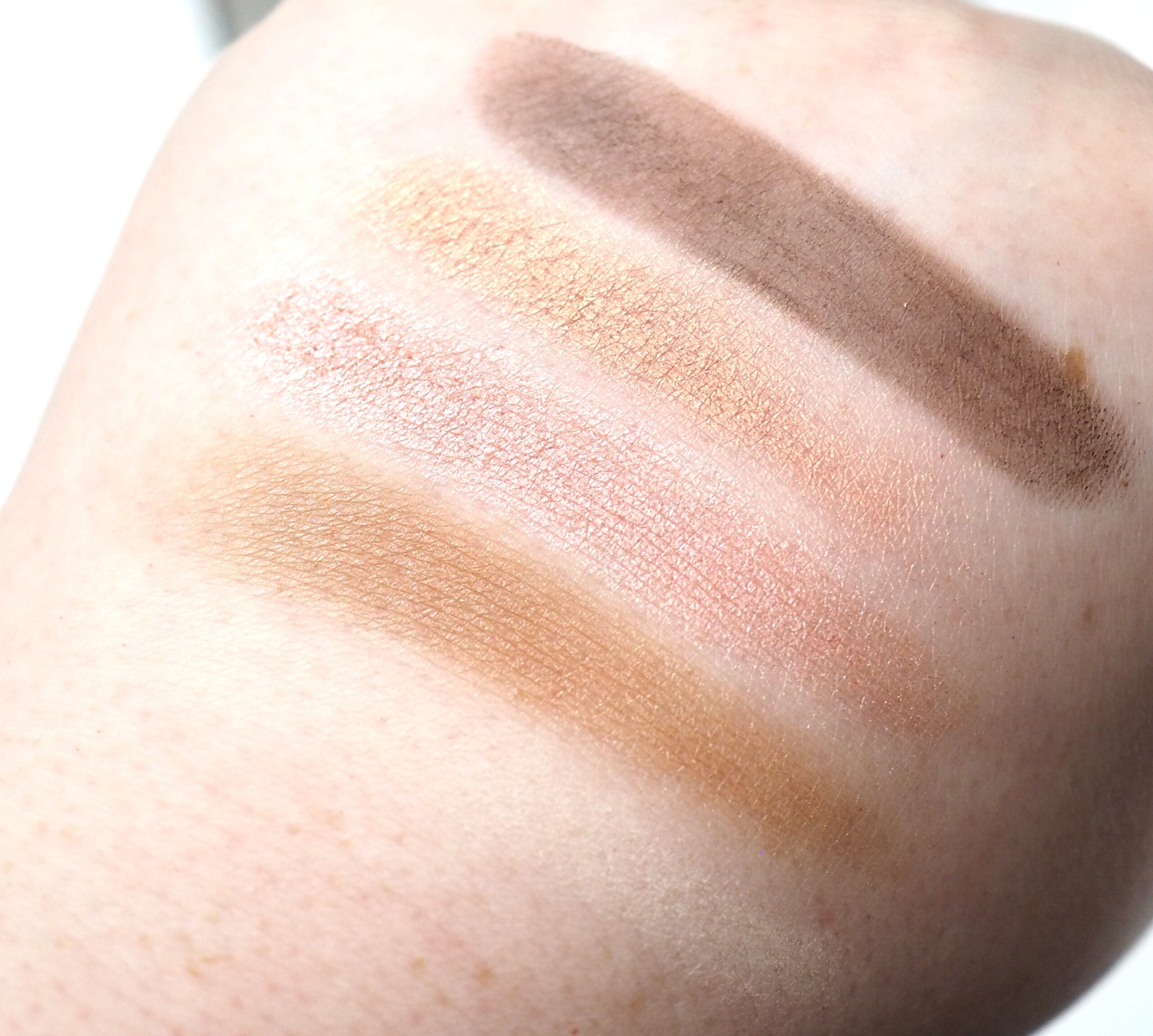 Before talking about my experience with this palette, I haven’t read any negative reviews about the quality of the shadows, but I’m seriously disappointed. For a £48 palette, the quality is not great.

They’re all very dry and powdery, and they’re all very difficult to swatch. That’s fine, you’re not going to wear eyeshadow stripes your hands or arms, and some shades which swatch poorly, come to life when blended onto the eyes, but not the By Terry VIP Expert Paris Mon Amour Palette. 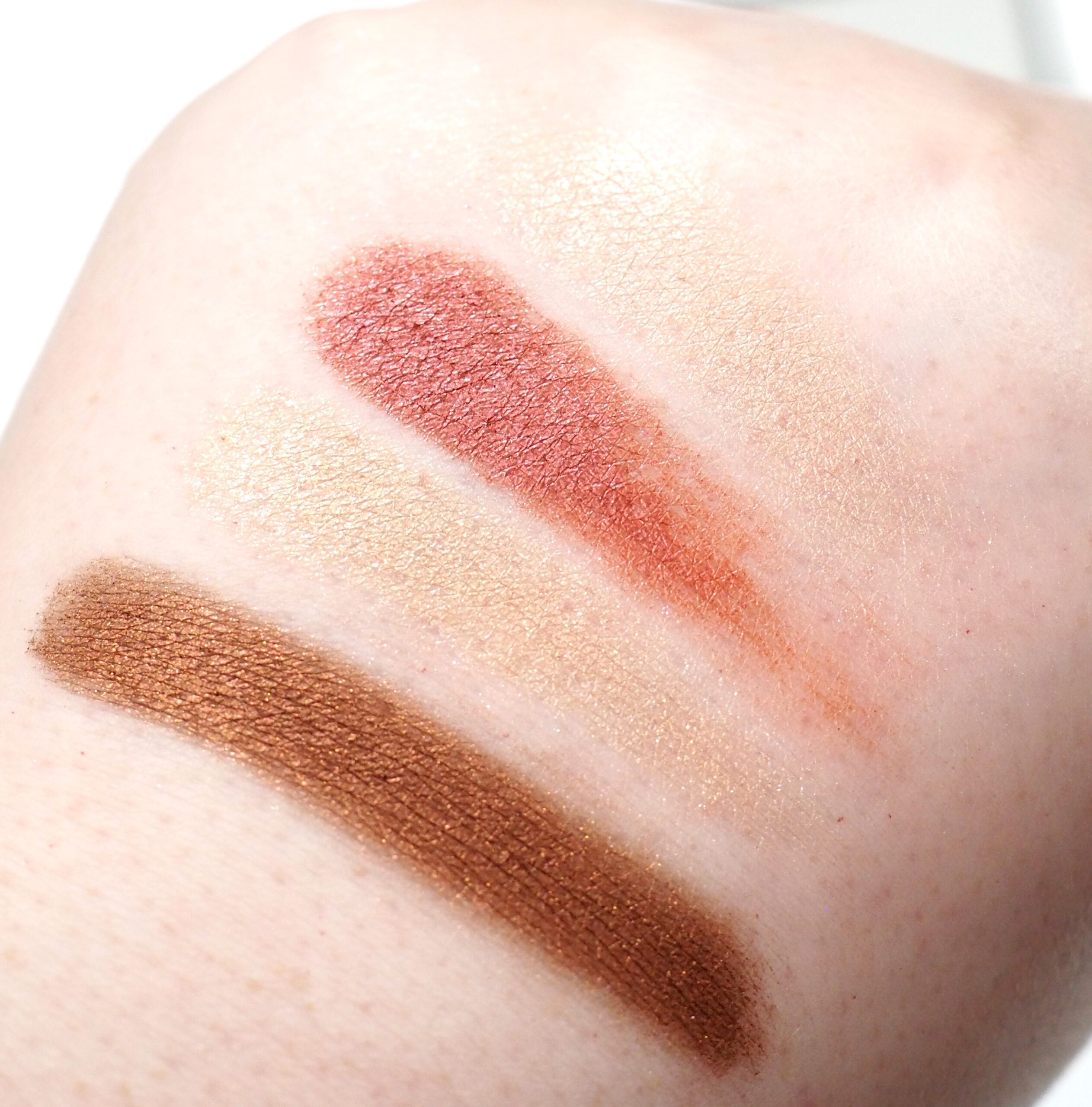 I’d go as far to say that this is the most disappointing eyeshadow palette I’ve tried all year. You could genuinely get better quality from Revolution, and for under £10, and this palette is almost £50.

The shadows are lacking in pigment, muddy when blended, and fade within a few hours, which isn’t an issue I ever have to worry about. The quality is so disappointing, I wouldn’t even pass this palette on to a friend, so I’m stuck with what to do with it.

I also don’t understand shade one and ten, they’re the same shade, so why would you put them both in the same palette? They’re both dusty, chalky off white mattes, and I can’t stress how disappointed I am with this entire palette.

I know I only paid £28 for the palette, but that’s not the point. I don’t know if I got a bad palette, or if this is just the By Terry formula, but at this point, I won’t be purchasing any more of their eye palettes, and I’d highly recommend not purchasing the By Terry VIP Expert Paris Mon Amour Palette unless you’ve been able to swatch it first, as it is not worth £48 of anyone’s money.