Barry M have done a few sneak peeks on both Instagram and Facebook that an influencer collaboration was on the way, and whilst they’ve not announced it on their social media platform yet, the collection has launched at Superdrug already.

If you’re unaware who Anna Lingis is, she’s a professional makeup artist & face/body artist based in London, and she creates amazing colourful designs over on her Instagram page.

The Barry M x Anna Lingis Eye Foil is available in two different shades; Copper and Heat, and it appears that they are both Superdrug exclusives. They’re £5.99 each which isn’t too bad, but they only contain 1.8ml which is a tiny amount of product.

Liquid eyeshadows tend to contain 3 to 5ml, so these are very stingy compared to other brands. They both look super pretty though, and this is how Anna Lingis described them both;

“I love a little sparkle, whether it’s a shimmery smokey eye or a glittery creative makeup look. So I obviously had to include these stunning metallic eyeshadows as part of my collection.” – Anna Lingis

Obviously with stock image swatches, you really can’t see a true representation of colour, shift or finish, but they look really pretty, and quite unique too.

I’m excited to see real swatches to see if they are foil like, or if they’re just shimmery. Many brands label products as being foils, but they’re rarely true foils, so I really hope the Barry M x Anna Lingis Eye Foil formula is a foil as I’m very tempted by both shades.

All images belong to Barry M. /  Collages by me. 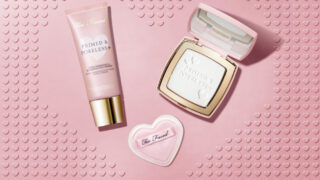